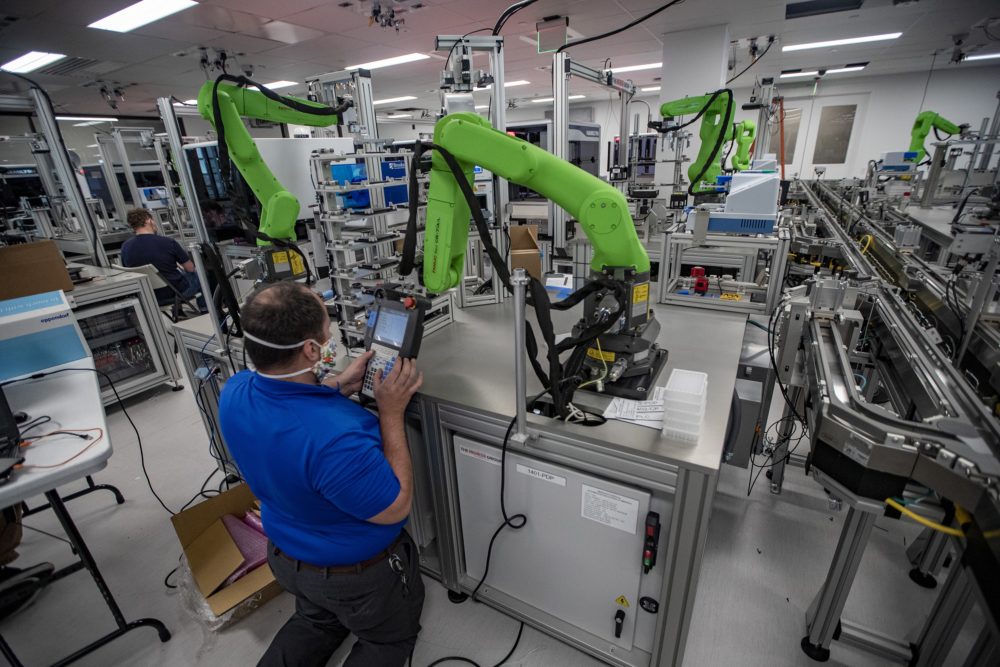 Gingko Bioworks, a synthetic biology company now valued at around $15 billion, begins trading on the New York Stock Exchange today. Gingko’s market debut is one of the largest in biotech history. It’s expected to raise about $1.6 billion for the company. It’s also one of the biggest SPAC deals done to date — Gingko is going public through a merger with Soaring Eagle Acquisition Corp., which was announced in May. Shares opened at $11.15 each this morning under the ticker DNA — biotech dieharders will recognize it as the former ticker used by Genentech. The exterior of the NYSE is decked out in Gingko décor. The imagery is clearly sporting Jurassic Park themes, as MIT Tech Review’s Antonio Regalado pointed out. It’s probably intentional: Jason Kelly, the CEO of Ginkgo Bioworks, has been re-reading “Jurassic Park” this week, he tells TechCrunch. The décor also sports a company motto: “Grow everything.” Ginkgo was founded in 2009, and now bills itself as a synthetic biology platform. That’s essentially premised on the idea that one day, we’ll use cells to “grow everything,” and Gingko’s plan is to be that platform used to do that growing. Kelly, who often uses language borrowed from computing to describe his company, likens DNA to code. Gingko, he says, aims to “program cells like you can program computers.” Ultimately, those cells can be used to make stuff: like fragrances, flavors, materials, drugs or food products. The biggest lingering question over Gingko, ever since the SPAC deal was announced, has centered on its massively high valuation. When Moderna, now a household name thanks to its COVID-19 vaccines, went public in 2018, the company was valued at $7.5 billion. Gingko’s valuation is double that number. “I think that surprises people to be honest,” Kelly says.

How is Gingko going to make money?

Ginkgo’s massive valuation seems even starker when you look at its existing revenues. SEC documents show that the company pulled in $77 million in revenue in 2020, which increased to about $88 million in the first six months of 2021 (per an August investor call). The company has also reported losses: including $126.6 million in December 2020 and $119.3 million in 2019. Gingko is aiming to increase revenue a significant amount in 2021. SEC documents initially noted that the company aimed to draw about $150 million in revenue in 2021, but the August earning call updated that total for the year to over $175 million. Gingko aims to make money in two ways: first it contracts with manufacturers during the research and development phase (i.e. while the company works out how to manufacture a cell that spits out a certain fragrance, bio-based nylon or meatless burger). That process happens in Gingko’s “foundry,” a massive factory for bioengineering projects. This source of money is already starting to flow. Gingko reported $59 million in foundry revenue for 2020, and anticipates $100 million in 2021, per the August investor call. This revenue, though, isn’t covering the full costs of Gingko’s operations, according to the information shared by the company in SEC documents. It is covering an increasing share, though, and as Gingko scales up its platform, costs will come down. Based on fees alone, Kelly projects Gingko will break even by 2024 or 2025. The second type of revenue comes from royalties, milestone payments or, in some cases, equity stakes in the companies that go on to sell products, like fragrances or meatless burgers, made using Gingko’s facilities or know-how. It’s this source of income that will make up the vast majority of the company’s future worth, according to its expectations. Once the product is made and marketed by another company, it requires little to no more work on Gingko’s part — all the company does is collect cash. The company is often hesitant to incorporate these earnings into projections, because they rely on other companies bringing products to market. That means it’s hard to know for sure when these downstream payments will emerge. “In our models, we are very sensitive that, at the end of the day, they’re not our products. I cannot predict when Roche might bring a drug to market and give me my milestones,” says Kelly. Kelly says there’s evidence this model will start to work in the near-term. Gingko earned a “bolus” milestone payment of 1.5 million shares of The Cronos Group, a cannabis company, for developing a commercially viable, lab-grown rare cannabinoid called CBG for commercial use (there are seven more in strains development, says Kelly). These milestone payments (in cash or shares) are earned when a company achieves some predetermined goal using Gingko’s platform. Gingko has also worked with Aldevron to manufacture an enzyme critical to the production of mRNA vaccines, and plans to collect royalty payments from that relationship — though no foundry fees were collected from this project. Finally, Gingko has negotiated an equity stake in Motif Foodworks, a spinout company based on its technology. That company has so far raised about $226 million, and will aim to launch a lab-grown beef product developed at Gingko’s foundry, paying Gingko the aforementioned foundry fees already for this contribution.

“The biggest value driver” of Gingko, according to Kelly

This rich source of cash will depend a lot on the outside contractor’s ability to manufacture and sell products made using Gingko’s platform. This opens the company up to some risk that’s beyond its control. Maybe, for instance, it turns people don’t want bio-manufactured meat as much as many anticipated — that means some types of downstream payments may not materialize. Kelly says he’s not particularly worried about this. Even if one particular program fails, he’s planning on having so many programs running that one or two are bound to succeed. “I’m just sorta like: some will work, some won’t work. Some will take a year, some will take three years. It doesn’t really matter, as long as everybody is working with us,” he says. “Apple doesn’t stress about what apps are going to be the next big app in the app store,” he continues.

In an increasingly hot biotech market, protecting IP is key

One key metric to watch for Gingko going forward will be how many new cell programs they’re managing to close. So far, Gingko has added 30 programs this year, says Kelly. Last year, there were 50 programs. Remember: Some of the projects are Gingko spinouts, like Motif Foodworks, not customers that come to the platform on their own. And historically, the number of companies Gingko has partnered with has been a point of criticism. Per SEC documents, the majority of revenue came from two large partners in 2020 — though Kelly told Business Insider that this was a pandemic-related downturn. The more programs Gingko has, the more it becomes insulated from the success or failure of any one product. Plus it’s a sign that people are at least using the “app store” for biology. “The biggest value driver of Gingko is how quickly we add programs,” Kelly says. meat beef burgers lab-grown