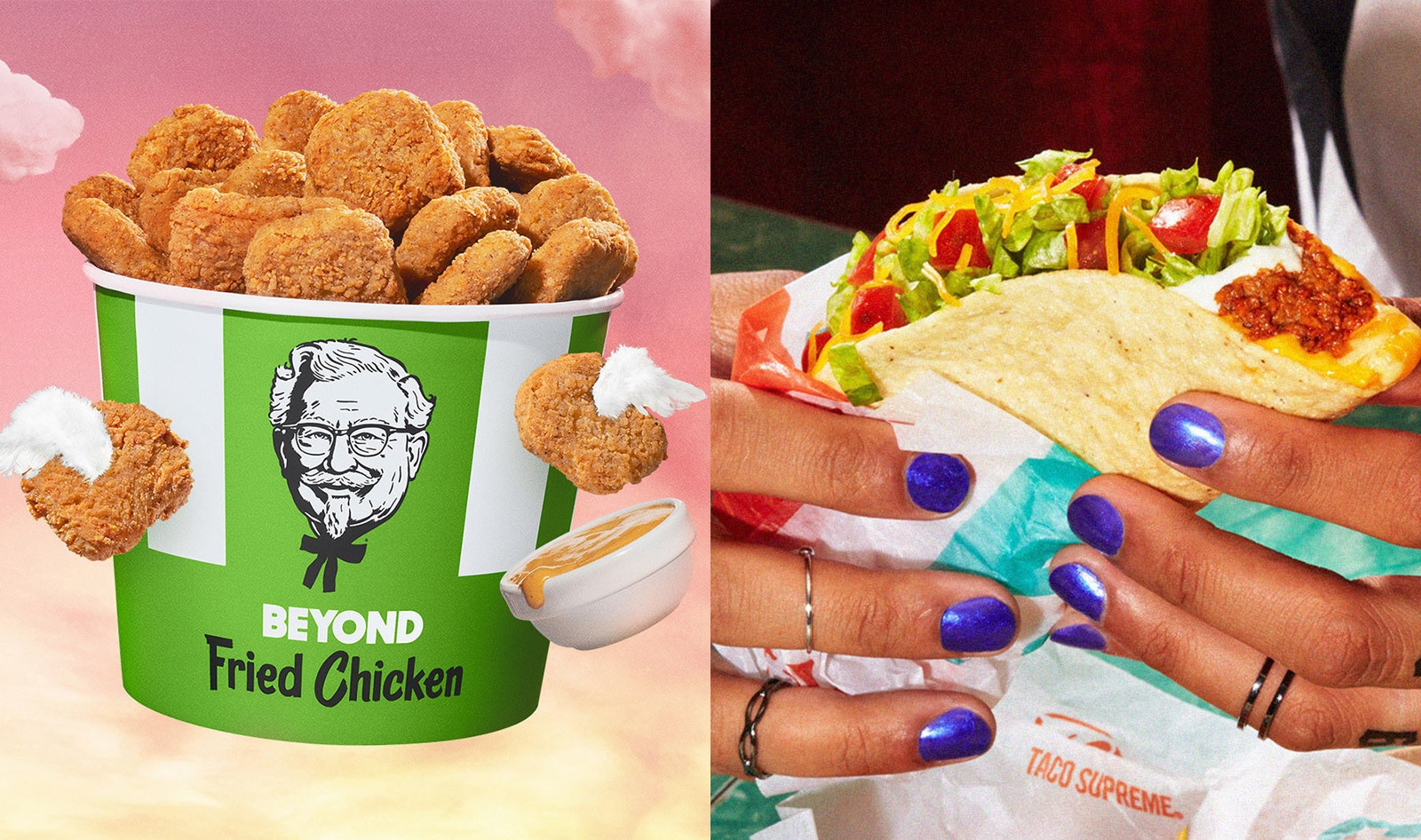 As 2022 comes to a close, we’re thinking about all the big vegan headlines of the year—and there were plenty. Overall, we can confidently say that this year was one filled with plant-based innovation.

From lupini beans as a base for dairy-free ice cream to watermelon seeds as a key ingredient for vegan cottage cheese to precision fermentation-made mozzarella, it is clear that the future of dairy does not lie in milking cows.

If years past were dominated by vegan burgers, 2022 was all about new plant-based chicken, both in stores and at places like KFC, Panda Express, and other fast-food chains.

Speaking of fast food, Burger King spent the year exploring the future of food with vegan pop-ups across the globe. In 2022, the international chain toyed with flipping the script by making plant-based meat the new normal, with animal meat available by request.

But before we set our sights on what the vegan future may hold, we’re taking a second look at the milestones that defined vegan news in 2022.

Back in January, Beyond Meat’s vegan chicken hit KFC’s 4,000 stores for a limited time and we were eating it up.

Here’s to hoping KFC revives Beyond Fried Chicken as a permanent option—maybe with a few new vegan dipping sauces?—in 2023.

2023 can’t come fast enough for pizza lovers. That’s because next year is when New Culture promises to put its vegan mozzarella cheese—made dairy-identical with the power of precision fermentation—on pizzeria menus nationwide.

And it’s not all talk at New Culture as the company is backed by agri-business giant ADM and $23 billion Korean conglomerate CJ CheilJedang, a major player in the US pizza industry.

Okay, it may not be a PSL—which in 2022 still contained dairy ingredients in the US—but Starbucks got cozy this fall with the launch of its first vegan-as is drink, the Apple Crisp Oatmilk Macchiato.

Maybe next year, Starbucks will heed the call of many a PETA protests and drop its vegan milk upcharge?

For at least five nights straight in September, dinner meant another trip to Panda Express for a combo meal of chow mein, Super Greens, and Beyond the Original Orange Chicken—and we know we weren’t the only ones making the nightly voyage.

Spicy, sticky, and sweet. This vegan orange chicken needs to stay on the menu forever. Panda, can you hear us?

Massive vegan supermarket PlantX opened its doors in Chicago this summer and grocery shopping has never been the same.

Reading labels for hidden animal products? Not here. The store has all of the produce, grab-and-go items, meats, cheeses, and desserts of a Whole Foods but without any animal products.

We’ve been off the teet for quite some time but new research continues to show that consuming animal milk is not for humans.

Case in point? A major study published in The American Journal of Clinical Nutrition in June found that men who consume the most dairy are at a 60-percent increased risk of developing prostate cancer compared to those who abstain from it.

When you take a look at the global picture, Burger King is doing the most when it comes to vegan food. Which led us to ask the question in August if the chain would be the first of its kind to drop meat for good.

While meat is still on the menu at Burger King, the chain continues to pioneer a plant-based future for fast-food and has introduced plant-based burgers to its menu in more than 70 countries to date.

8 Keto is the least healthy diet of the year

Ever wonder what eating mostly bacon, cheese, and butter will do to your health? These are the building blocks of a keto diet and this way of eating was ranked as the least healthy, according to nutrition experts at US News and World Report.

Not surprisingly, experts ranked plant-centric diets at the top for their filling fiber-rich foods and environmental benefits.

While eating plant-based is quite easy nowadays, Food Network finally came around with its first vegan cooking show It’s CompliPlated, a competition that pits chefs against each other to cook for picky eaters.

And who better than to host the network’s first vegan show? None other than easy-to-watch personality Tabitha Brown.

10 Taco Bell gets into vegan beef

Taco Bell has been a longtime favorite for many stranded late-night partiers looking for a quick bite of something tasty. This fall, midnight snackers in and around Birmingham, AL were pleasantly surprised with a vegan beef option at approximately 50 Taco Bell locations.

What would we order? 10 vegan beef soft tacos, al fresco with a handful of fire sauce packets, please.

Beyond Meat and Taco Bell have been teasing their partnership for a few years and in October, that turned into an announcement of epic proportions. Beyond Carne Asada, a marinated vegan steak, arrived at approximately 50 test locations in the Dayton, OH area.

The best part? It didn’t cost extra to upgrade from animal meat to Beyond’s vegan steak.

Avocados are so temperamental when it comes to ripening but science says eating them has a host of benefits. A study published in the Journal of the American Heart Association this summer found that eating these green-hued berries (that’s right) daily can help lower cholesterol.

And our big batch of guac has been slowly browning in the fridge ever since.

Driven by our desire to end animal exploitation, vegans are a creative bunch when it comes to developing cheese alternatives.

And the queen of vegan cheese, Miyoko Schinner, really outdid herself this year when she showcased the world’s first dairy-free cottage cheese at trade show Natural Products Expo West in March.

What’s in this magical vegan cheese? Schinner used a combination of plant bases, including watermelon seeds.

Founder Deborah Torres famously rejected a $1 million deal on Shark Tank, choosing not to give up 100 percent of the company to the sharks because she knows her worth.

From London to Berlin to Costa Rica, Burger King’s vegan pop-ups are so common nowadays that we stopped counting them. However, for its newest plant-based location in Lisbon, Portugal, the fast-food chain piqued our interest again when it removed all animal products from its kitchen to avoid cross contamination concerns.

This means that throughout November, the Whopper, Long Chicken, Chicken Nuggets, and other plant-based options at this Burger King never came out of a shared fryer with animal products. Bravo!

16 Wicked Kitchen’s vegan ice cream is made from lupini

Lupini beans are actually legumes and are totally delicious as marinated snacks typical to Mediterranean cuisine. Until this year, we had no idea that they can double as a creamy ice cream base, too.

And it’s all thanks to Wicked Kitchen, a brand that released a variety of novelty vegan ice cream bars made with, you guessed it, lupini beans as a key ingredient.

One Netflix documentary that had us glued to our screens was Bad Vegan, which detailed the bizarre true story of Sarma Melngailis and beloved New York City vegan restaurant Pure Food and Wine.

To give fans of the film a taste of the menu at the shuttered restaurant, Netflix hosted a delivery-only event with Postmates that made its famous dishes like Caesar salad, Signature Raw Lasagna, and Mallomars available to the public one last time.

If its die-hard celebrity fans are any indication, Crossroads Kitchen is the place to be for delightful plant-based fare. And this year, the legendary eatery—helmed by acclaimed chef Tal Ronnen—expanded to its second location in a grand way.

That’s because when it opened its doors on May 28 at the Resorts World Las Vegas, Crossroads Kitchen officially became the first vegan fine-dining restaurant on the strip.

While Beyond Orange Chicken might be hard to beat, we will never say no to more vegan options at Panda Express. The chain explored just that in January with the test launch of beefy Beyond Meat dishes at its Innovation Kitchen location in Pasadena, CA.

Just when we stopped thinking about how IHOP has not yet stepped into the modern era with plant-based options (give us pancakes, already), a Flip’d by IHOP location in the Flatiron neighborhood of New York City came through with some news.

In February, we connected with Bryan McKenzie, the franchise owner of the location, who as a vegan himself, was excited to put the Plant Based Cali sandwich (the first-ever vegan breakfast offering at IHOP) on the menu for a limited time.

21 Vegan chicken that’s made to rival Popeyes is here

Listen, we love a chicken sandwich as much as the Popeyes set … we just like ours without cruelty, please.

22 Burger King gets into vegan chicken with Impossible Foods

Did we mention Burger King dominated our headlines in 2022? This last one is special because it takes us full circle back to Burger King’s first plant-based moment: its launch of the Impossible Whopper back in 2019.

Years later, Burger King is still going strong with its longtime partner Impossible Foods, which helped craft its first plant-based chicken offerings in the United States that the fast-food chain tested back in August at participating locations in Cincinnati, OH. All hail the King.