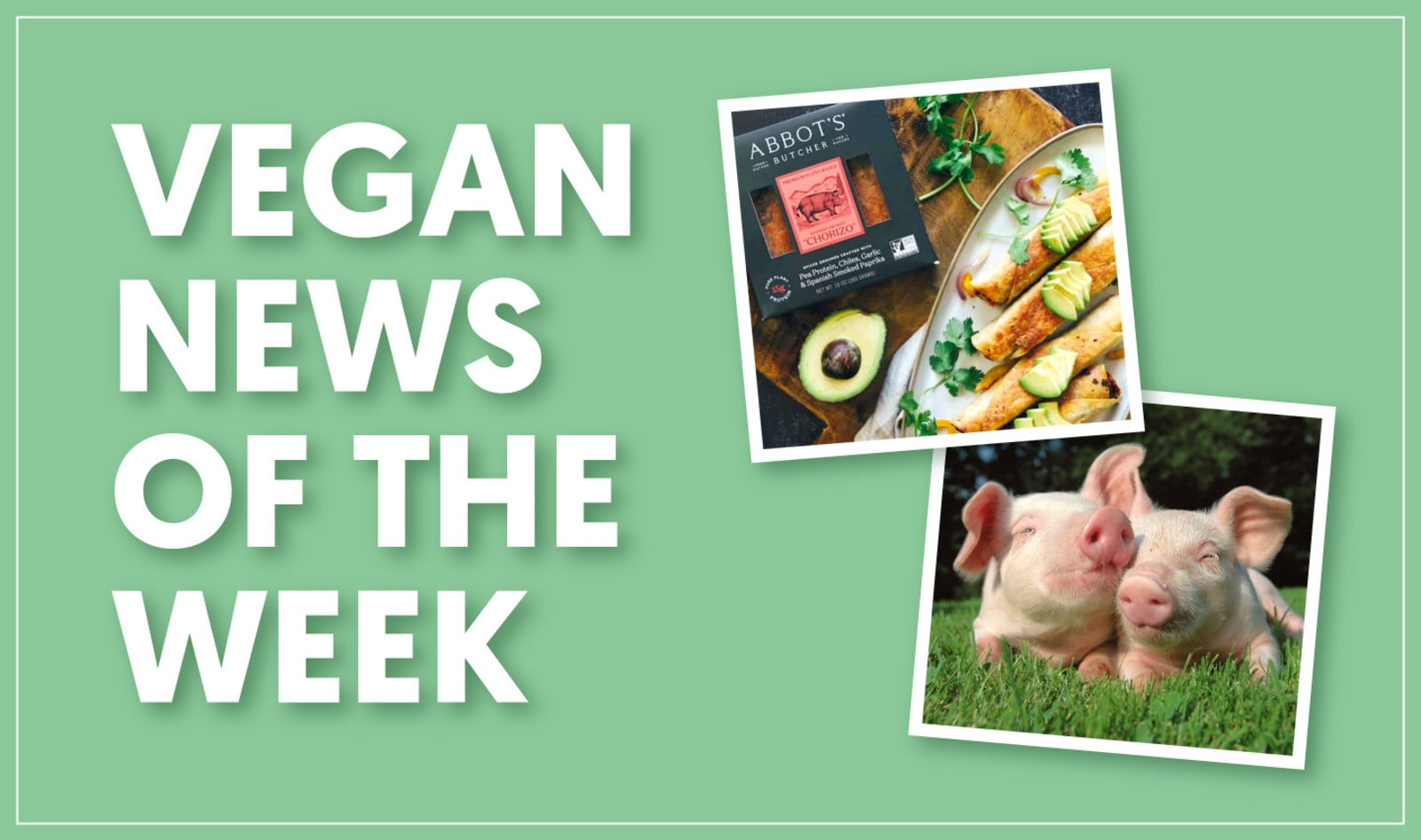 It seems that every week in the world of vegan food news is more exciting than the last and this week is no exception. Some meaty vegan news this week included pork-free chorizo landing on the menu at burrito chain Freebirds; strongman Patrik Baboumian throwing his weight behind new plant-based meat brand GREENFORCE; and new beefy dishes launching from Panda Express and Beyond Meat. And if you’re wondering which country had the most sign-ups for Veganuary this year, you might be surprised to learn that the title goes to the US of A. Read on for more.

This week, Texas-based chain Freebirds World Burrito added pork-free chorizo as a protein option in any meal to its more than 50 locations across the state. The new chorizo comes courtesy of Abbot’s Butcher, a California company with celebrity backing from Woody Harrelson and Owen Wilson that specializes in soy-free, whole food-based vegan meats. To entice new customers with its burritos, the chain also updated its tortilla selection to include a grain-free option from fellow Texas brand Siete Family Foods.

“You can’t have a great burrito without a great-tasting tortilla and Siete’s grain-free tortillas are the perfect complement to our flour and spicy cayenne options,” Freebirds CEO Alex Eagle said in a statement. “Abbot’s plant-based chorizo is so good and perfectly seasoned, some people won’t even know that it is entirely plant-based.”

Nowhere near Texas but craving vegan chorizo? You’re in luck because as of January 3, Chipotle has been serving its own pork-free chorizo at all of its more than 2,700 locations nationwide.

Elite athlete Patrik Baboumian is known for his strength and endurance and now, he’s throwing his weight behind plant-based brand GREENFORCE to help it expand to the United Kingdom. The sustainability focused brand makes pea protein-based mixes that can be turned into vegan meats with just a little water. This makes the product shelf-stable and eliminates the need for things like refrigeration during transport and storage—an environmental win.

Baboumian got involved as an ambassador to get GREENFORCE on UK shelves after the German brand found success domestically and in Austria, Switzerland, Belgium, and the Netherlands. “Our ultimate mission is to revolutionize the food industry with unique products that don’t come at the expense of animals, the environment, or our health,” he said in a statement. “We believe in a sustainable future that harnesses the power of plants and value high-quality proteins. Without any unnecessary additives, in just a few steps, you can make meatballs, sausages, mince, or a juicy burger out of powder.”

If Baboumian looks familiar that’s because he was featured in the uber-popular documentary The Game Changers, a must-watch flick for anyone interested in how plant-based diets power some of the world’s top athletes.

Last year, the partnership between Panda Express and Beyond Meat brought us the delectable Beyond The Original Orange Chicken (BTOOC), a vegan version of the chain’s most popular menu item, slathered in that same tangy sauce but without any of the animal products. While Panda is still testing the BTOOC—which it most recently rolled out at 70 locations across 10 states—the vegan chicken is already a top-performing regional item.

On the heels of BTOOC’s sell-out success, Panda is exploring other possibilities with Beyond Meat. This week, the chain unveiled two dishes, spicy mapo tofu and garlicky green beans—each made meaty with Beyond Beef—at its innovation location in Pasadena, CA. At this location, chefs are able to experiment with new dishes that could eventually roll out to additional Panda outposts and even nationwide.

From now through February 23, those lucky enough to live in sunny Pasadena can get a taste of the limited-time Mapo Tofu with Beyond Beef and String Beans with Beyond Beef—both items that do not contain animal products but share cooking surfaces with Panda’s other dishes.

4 Starbucks’ gets deep into oat milk with new Frappuccinos

Starbucks added Oatly’s oat milk to its menu last March and customers lapped it up. By April, the coffeehouse giant was reporting oat milk shortages due in part to the popularity of the Iced Brown Sugar Shaken Oatmilk Espresso, a beverage it introduced to promote its Oatly launch which combines brown sugar and cinnamon, and is then topped off with oat milk.

Now, Starbucks is expanding its love affair with oat milk—a much more environmentally friendly milk option compared to dairy—to its retail arm with the launch of two new bottled Frappuccinos in Caramel Waffle Cookie and Dark Chocolate Brownie. Coming to stores by the end of the year, the new deliciously dessert-forward oat milk Frappuccinos will be sold alongside Starbucks’ new multi-serve Cold Brew with oat milk in a dark chocolate flavor.

5 US Veganuary pledges outpace everyone else

The last week of January means the final days of Veganuary are upon us and this year’s campaign was a big hit worldwide with a record 600,000 sign ups. If you’re not familiar, Veganuary is a United Kingdom-based campaign that challenges people to go vegan for the month of January and beyond. And to date, 2 million people around the world have heeded the call to ditch animal products for the month.

So which country got the most sign-ups in 2022? Surprisingly, the United States—where the Veganuary campaign has only had a foothold since 2020—is the big leader this year, outpacing the other 280 participating countries. The states with the most Veganuary pledges are California, New York, Georgia, Florida, and Texas.

“It’s great to see Americans embracing Veganuary in a big way,” Wendy Matthews, US Director of Veganuary, said in a statement. “As people become more informed about the impact our food choices have on the planet, our health, and animals, I predict interest in veganism will continue to rise exponentially both at the consumer and corporate levels.”