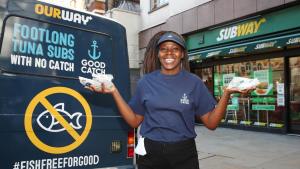 Good Catch creates its plant-based tuna out of peas, chickpeas, lentils, soy, fava beans, and navy beans. The company says it mimics the taste and texture of seafood.

Co-Founder of Good Catch, Chad Sarno, said in a statement sent to Plant Based News: “Our mission is to make plant-based seafood that’s good for the sea and all life who call it home. Large commercial fishing is one of the most destructive activities in our oceans. We can do better.”

“We’re here to offer great tasting seafood alternatives without bycatch, mercury or environmental damage,” he continued. “With the Subway news grabbing headlines across the globe, this is the perfect moment to inform people that there is a better way to enjoy the taste and experience of delicious seafood without harm to our oceans.”

Sarno added: “We want to encourage Subway, and other businesses, to add fish-free options for goodness to all.”

In January, The Washington Post reported that Subway is facing a class-action lawsuit in California following claims that the sandwich chain’s tuna subs do not contain tuna.

A spokesperson for Subway told the publication that the accusations are ‘a reckless and improper attack on Subway’s brand and goodwill’.

Carmel sent the meat to a lab for testing. The results concluded: “We cannot identify the species.”

A spokesperson from the lab explained further: “There’s two conclusions. One, it’s so heavily processed that whatever we could pull out, we couldn’t make an identification. Or we got some and there’s just nothing there that’s tuna.”

Dave Rudie is the President of Catalina Offshore Products in San Diego. He told the New York Times: “I don’t think a sandwich place would intentionally mislabel. They’re buying a can of tuna that says ‘tuna.’ If there’s any fraud in this case, it happened at the cannery.”

The post Free Vegan Tuna Subs Given Outside Subway Amid 0% Fish DNA Scandal appeared first on Plant Based News.