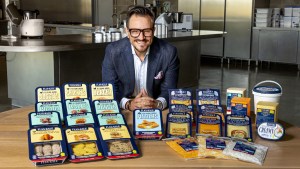 Flax & Kale, the brand under a renowned restaurant specializing in health foods, has announced it is launching 45 new ‘revolutionary’ plant-based products.

Moreover, it claims to be ‘the only’ multi-category brand to create local plant-based products in Spain.

The range will be one of the biggest Spanish-produced plant-based product lines to date.

It consists of 14 vegan meat products and 31 dairy-free cheese items such as gouda, cheddar, and mozzarella in different forms.

Vegan meat on offer will include a beef and chicken alternative available in hamburgers, croquettes, nuggets, meatballs, and mince.

Celebrated international chef Teresa Carles formed the recipes. Moreover, they have been tested in the group’s restaurants for three years.

All are produced in a modern research and development facility in Lleida, Catalonia.

The Flax & Kale brand is under the Teresa Carles Healthy Foods restaurant group.

CEO Jordi Barri told PBN: “Our ambition is to become a leader in the plant-based market in Spain over the next few years.

“With a very diverse range and truly competitive prices, which we can offer thanks to 100 percent local production and sizeable investment over recent years in the latest generation industrial production lines.

“This launch is just the first step in that direction, and there will be many more steps in the coming months.”

It comes as the brand anticipates ‘enormous potential’ in the Spanish plant-based sector this year.

Additionally, restaurants are adding more vegan options to their menus across the country.

According to figures published on Statista, vegans and vegetarians in Spain are limited.

This is according to surveys revealing almost 90 percent of the population ate both meat and dairy.

However, these figures are from 2019 – and updated data shows an increase in stores offering vegan food.

The products are soon available online and in leading supermarkets and restaurants across Spain.

Specific dates surrounding the launch are yet to be released.