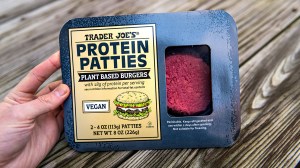 The data comes from a poll of more than 6,000 respondents, conducted by Plant Based News.

A staggering 5,458 participants voted against the proposal to prohibit plant-based products using labels such as ‘mince’ and ‘sausages’.

She argues the meat industry should have ‘sole use of product names that have meant only one thing for centuries’.

According to 7News, McDonald added: “If you prefer tofu over T-bone, then you go for it – but forget the ethics of eating animal products.

“This is about protecting a highly valuable industry… And also providing a clear distinction between the real thing and the alternatives so consumers know exactly what they’re getting.”

A similar bill was also approved in Texas last month. House Bill 316 calls for meat labels to be strictly defined as ‘any edible portion of a formerly live and whole cattle/ chicken carcass’; not derived by ‘synthetic or artificial’ means.

However, new research conducted by Cornell University has busted the myth that plant-based descriptors confuse consumers.

It found ‘consumers are no more likely to think that plant-based products come from an animal if the product’s name incorporates words traditionally associated with animal products than if it does not’.

Moreover, it argues ‘omitting words traditionally associated with animal products from the names of plant-based products actually causes consumers to be significantly more confused about the taste and uses of these products’.

Klaus Mitchell is the Founder of Plant Based News. Speaking about the poll, he said: “It’s nice to see the overwhelming majority of people recognize plant-based meat labels aren’t causing an issue.

“Consumers aren’t getting confused by them, and now there’s actual evidence to prove that.

“These bills put forward in Texas and Australia are a desperate last hit from the meat industry. But even they can’t deny the roaring success of plant-based meat products.”