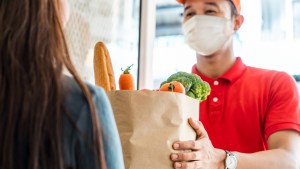 Deliveroo and Instacart are seeing ‘rapidly rising’ vegan orders, as well as a vast increase in plant-based search terms.

This is according to new data presented to Vegan Women Summit (VWS), a global events organization working to empower women.

Experts working for the delivery giants confirmed the shift in demand.

At a VWS summit, Deliveroo’s Vegan Category Lead Elena Devis revealed that more than half of the UK is expected to be flexitarian by 2025.

Additionally, half the company’s grocery orders contained vegan items this Veganuary. And, 35 percent of fine-dining restaurant orders include vegan dishes.

Searches for vegan items are ‘dominant’ among customers. They include ‘meatless’, but a shift is also emerging in specifically ‘plant-based’ and ‘vegan’ terms.

And, it’s the fastest-growing category for Deliveroo: hiking at a rate of 107 percent.

‘Some people are concerned that the word vegan puts people off. But the data shows the search term vegan is used five times more often than plant-based’, she added.

Instacart’s Trend Expert Laurentia Romaniuk echoed this. Plant-based milk remains the most frequent choice on the retailer and people are searching for vegan and vegetarian options in a ‘substantial rise’.

Moreover, they credited cultural influences such as Netflix documentaries including Seaspiracy, vegan celebrities, and Veganuary.

‘When certain big cultural events occur, like the release of Seaspiracy, we see it reflected in consumer demands’, Romankiuk confirmed.

Collaborations with celebrities, such as Veganuary partnerships, are ‘highly effective’ in this, she added.

Over the pandemic, deliveries increased as restrictions forced people to stay inside their own homes. As a result, both platforms experienced soaring demands. This shift is understood to be a permanent one, however.

Devis stressed the importance of plant-based companies being available online in light of this.

You can find out more about Vegan Women Summit here