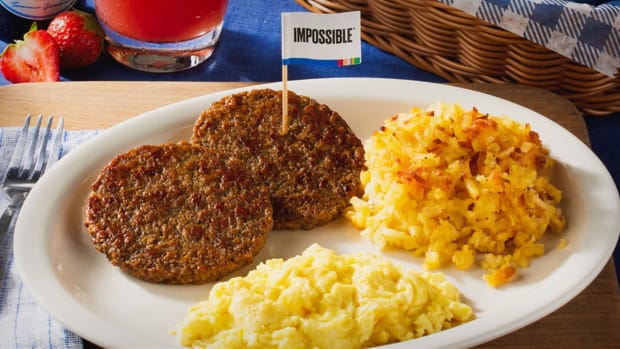 Recently, Cracker Barrel  (CBRL) - Get Cracker Barrel Old Country Store Inc. Report announced recently a new menu item. Surprisingly, however, it was met with immediate backlash: creating a divide in those who love and hate Cracker Barrel. Unexpectedly, this backlash spread on both Facebook  (META) - Get Meta Platforms Inc. Report and Twitter  (TWTR) - Get Twitter Inc. Report posts, especially in the comment sections.

Plant based foods being featured as a part of classic menu items, or as new standalone products, is not unheard of. McDonalds  (MCD) - Get McDonald's Corporation Report released the McPlant in partnership with Beyond Meet  (BYND) - Get Beyond Meat Inc. Report, which was a test product run that concluded as of August 1, 2022.

Other companies like Burger King  (QSR) - Get Restaurant Brands International Inc. Report sell the Impossible Whopper in partnership with Impossible Foods. And, both Beyond and Impossible items can be brought in select grocery stores for consumption.

The American restaurant chain added the item to its breakfast menu following a trial at 50 various Cracker Barrel locations. Cracker Barrel's Sara Breymaier, director of Menu Strategy, regards this new item as an accomplishment: "Our new breakfast menu innovations provide a personalized experience with delicious breakfast choices to satisfy every taste bud – whether guests are nostalgic for homestyle food, hungry for a nutritious plant-based option or have a craving for a sweet treat. At morning, noon or night, we want guests to enjoy craveable breakfast favorites at a compelling value.”

The item will be sold alongside fried apples, hash browns, and grits (if desired). It will also be featured on the all-day breakfast menu.

A few days after the announcement, people heard about the change, and tweets and comments on Cracker Barrel's Facebook started to roll in.

Most of the responses have been negative, either reprimanding those upset about the release, getting upset over the release, or discussing controversy with Cracker Barrel itself.

Many people, however, have expressed that they hate Cracker Barrel now that it has released plant-based alternatives. This hatred for veganism and vegetarianism has sparked amusement from other readers as well.

One user said, "Don't ever try to push that crap in my direction. Stick to the basics that made your franchise a success," "Are you kidding me? Who do you think your customer base is? I still order the double meat breakfast and it's not even on the menu anymore."

Another commented as well, saying, "You just lost your customer base, congratulations on being woke and going broke..."

Others are making fun of those upset over the plant-based sausage, describing it as a strange choice considering other bigger issues that Cracker Barrel had been accused of in years prior. The chain has been sued in the past for racial and gender discrimination, which it changed its stance on officially in 2016, now promoting an all-inclusive hiring policy instead.

While there were many people who seemed incensed at the mere suggestion that Cracker barrel would dare be considerate of its non-meat eating customers, some did seem excited for the addition of the new Impossible Sausage: