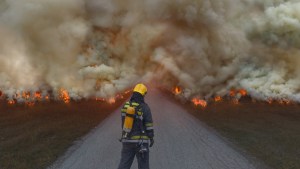 The 2021 UN Climate Change Conference, COP26, is just weeks away. This year, from October 31 to November 12, environmental experts will join global leaders in Glasgow to plan ways they can help fight the climate emergency.

Here’s everything you need to know about it.

What is the UN Climate Change Conference?

The UN, an intergovernmental panel, holds the summit with 197 of the world’s countries who have signed the Framework Convention on Climate Change (UNFCCC).

It came into effect in 1994 and is essentially an agreement to prevent ‘dangerous’ human damage to the climate. Its main objective is to stabilize greenhouse gas emissions (GHGs) to allow ecosystems to ‘adapt naturally’ to climate change.

At the annual UN conference, legally binding duties are decided amongst member countries to help minimize GHGs. And since a decade ago, these duties have focussed on the Paris Agreement, which sets out to limit global warming to ‘well below’ two degrees celsius.

The event is also referred to as the Conference of the Parties, COP for short. And, this year marks the 26th.

For COP26, the UK is hosting. And former Business Secretary Alok Sharma MP is the president, giving up his cabinet office role for the event.

As president, he will lead preparations and coordinate the UK government action to become net-zero by 2050.

Speaking on the role in the House of Commons, he said he plans to increase ‘ambition’ on an international level.

Moreover, he said he will look into ‘phasing out’ coal, reduce emissions, and encourage investment into renewable energy. Further aims of COP26 include reducing deforestation and restoring ecosystems.

And all ‘developed’ countries will be expected to put forward at least $100 billion towards climate-friendly enterprises.

As the summit focuses entirely on the climate breakdown, many have called for it to offer a completely plant-based menu.

Among them are a host of NGOs, animal rights organizations, MPs, and celebrities. They include Ricky Gervais, Joquin Phoenix, and Billie Eilish.

In a co-signed letter, their calls state: “With animal agriculture being such a major source of greenhouse gas emissions, it is impossible to meet goals set out in the Paris Agreement without making changes to our global food system.

“Even if all other major sources of emissions were reformed, we will still fall short…

“Addressing these urgent areas in the UNFCCC COP26 meeting would help propel governments around the world to take action and would provide world leaders with another high-impact option to add to their toolbox for tackling climate change.

“We call on the UNFCCC to formally and publicly recognize the role of animal agriculture as one of the largest contributors of climate change and to open greater space for dialogue.”

You can find out more about COP26 here

The post COP26 Is Fast Approaching. Here’s All You Need To Know About It. appeared first on Plant Based News.

Panera Aims to Be Climate Positive by 2050. Will Vegan Food Play a Role?