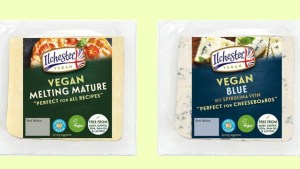 Under the Norseland brand, which owns Applewood, Mexicana, and Jarlsberg, the launch comes in two flavors.

Moreover, the Blue will include spirulina to mimic the look of blue cheese – and it promises to have the same creamy texture with ‘sharp and salty’ taste.

The Melting Mature boasts to have the same ‘meltability factor’ as dairy cheddar cheeses.

Both will be available in 319 Tesco stores nationwide from Monday, July 5.

However, to get your hands on the products before then the brand is offering taster packs to people who sign up to its newsletter before Sunday, July 4.

The brand’s been inundated with requests since unveiling the products in Norseland‘s Vegan Festive Selection last Christmas,

“[This] prompted us to look at how viable an option this was, and of course to find a supermarket to list them, so we were thrilled when Tesco wanted to come on board.”

Demand is high for vegan cheeses that are healthier and tastier, she added.

It comes as total sales of Applewood Vegan are hiking £4.2 million – a growth of a staggering 301 percent over the past 12 months.