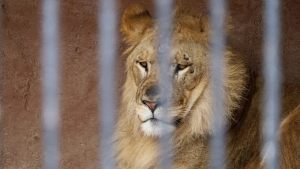 A growing number of zoos are giving their captive animals experimental COVID-19 vaccinations, despite the fact that they are still under development.

Zoetis – a former subsidiary of Pfizer that creates drugs for animals – is giving more than 11,000 doses to nearly 70 zoos. The company will also give vaccines to more than a dozen conservatories, sanctuaries, animal institutions, and government organizations across 27 states in the US.

Zoetis originally aimed to produce dog or cat COVID-19 vaccines, thinking there may be a demand for them. But when minks began catching COVID-19 at fur farms, the company pivoted. The new vaccine will be given to more than 100 mammalian species.

Though the vaccines have been authorized by the U.S. Department of Agriculture, they are still under development. Research to measure safety and effectiveness is ongoing.

Therefore, Zoetis said it isn’t sure how each species will react to the vaccine. “We can’t make a new vaccine for every species,” said Mahesh Kumar, senior vice president of global biologics at Zoetis.

This month, zoos in Wisconsin will begin giving animals like great apes, tigers, lions, skunks, and badgers the Zoetis vaccine. The Philadelphia Zoo in Pennsylvania announced it will vaccinate its gorillas, otters, and aye-ayes (an endangered type of lemur), among others.

The Milwaukee County Zoo and the Henry Vilas Zoo in Madison are participating, too, as well as Ohio’s Cincinnati, Columbus, and  Akron zoos.

In January, a troop of eight gorillas at San Diego Zoo Safari Park contracted COVID-19 from a zookeeper. It was the first known case of an ape becoming infected.

Last week, a snow leopard at the park’s sister facility, San Diego Zoo, developed the disease, too. The 9-year-old animal shares his enclosure with a female snow leopard and two Amur leopards, who are now being monitored.

Additionally, some big cats at the Bronx Zoo in New York City have contracted COVID-19.

The Centers for Disease Control and Prevention suspects that zoo animals who catch it likely do so from their caretakers. This has sparked debate over whether the animals would be developing the disease at all if they were not in captivity.

Meanwhile, the likelihood of animals spreading the disease to humans is ‘considered to be low’.

Speaking about the possibility of COVID-19 vaccinations for pets, Zoetis’ own Kumar commented: “The best thing you can do is vaccinate yourself.”

Vaccinating zoo animals is not uncharted territory. It’s common for industries that rely on animals – whether for entertainment or food – to administer vaccines or antibiotics preventatively.

Govett revealed that animals can be trained to ‘provide a shoulder, a hip’. When that isn’t possible, she said: “Sometimes we administer them through a syringe attached to a pole. Other times, we can administer it through what we call a ‘blow dart’ or a carbon dioxide injected dart.”

Lawmakers are cracking down on some types of drug use on zoo animals. A new bill seeks to ban zoos from giving animals psychoactive drugs.

The bill was proposed after The New York Times published an article titled Modern Zoos Are Not Worth The Moral Cost. It revealed that animals like gorillas are given psychoactive drugs to promote breeding. In one case, a female gorilla named Johari kept fighting off the male she was supposed to mate with. The zoo gave her Prozac, an antidepressant, until she eventually surrendered.

The New York Times found that around half of zoos in the US and Canada were doing the same.