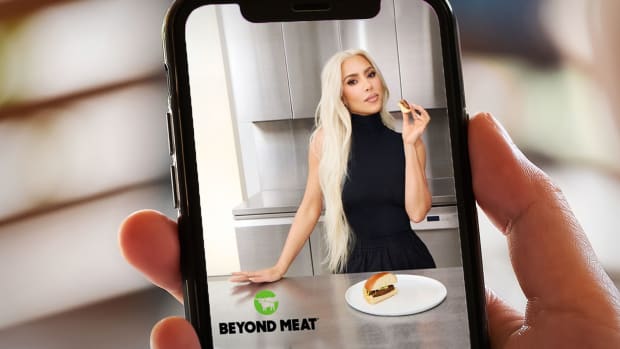 Kim Kardashian has been enlisted as Beyond Meat's "chief taste consultant."

The latest plant-based meat campaign relies on what is perhaps the most famous face of all this decade. With 313 million followers on Instagram, Kim Kardashian has been enlisted as Beyond Meat's  (BYND) - Get Beyond Meat, Inc. Report "chief taste consultant" to promote the L.A.-based company's alternative chicken and beef products.

As part of the partnership, the socialite and "Keeping Up With the Kardashians" star will be sharing some of her favorite Beyond recipes in the company's newsletter and posting about how much she loves beyond on her Instagram account.

"I've been focusing on going more plant-based and can tell you that Beyond Meat is my absolute favorite," Kardashian says for the ad campaign. "I love how all their products not only taste amazing but are also good for me and my family. Plus, my kids are obsessed with my Beyond Beef taco recipe, the Beyond Burger for BBQs and Beyond Chicken Tenders for a quick snack."

Kim Kardashian Is (At Least Temporarily) Good For Stock Performance

No news was released on the terms of the partnership or how much Kardashian was compensated for doing Beyond's marketing for them.

"I believe so much in the mission of Beyond Meat that I've stepped in to help with my biggest asset: my taste," Kardashian says in an Instagram video that was posted on her account at the same time as news of the partnership broke.

As soon as news of the partnership broke, Beyond stock jumped 8% to $26.50 but tapered back down again shortly after.

Launched in 2009, the alternative meat producer has been stagnating somewhat amid competition from both new players and legacy companies wanting in on the skyrocketing demand. Nestlé, Smithfield Foods and Cargill have all recently either released or committed to releasing a veggie patty.

Beyond's stock, meanwhile, is down more than 80% year-over-year.

But while Beyond may be struggling to find its place among so much competition, demand for plant-based meat continues to grow as many people in western countries seek to minimize meat consumption for both environmental and health reasons.

And since Beyond is currently one of the biggest alternative meat producers in the world, many analysts are speculating whether it's time to "buy the dip" since demand for veggie products is not likely to wind down any time soon.

What Will Kim's Face Do For Beyond?

Kardashian's astronomical popularity is bound to help Beyond with outreach and promotion. Less than an hour after being posted to Kardashian's Instagram account, the video of her being brought various dishes with Beyond meat gathered nearly 1 million views and over 350,000 likes.

But as influencers and celebrities often use their Instagram accounts to peddle questionable products or things they clearly do not use themselves, some followers are growing increasingly tired of these types of promotions and respond with snark.

"You didn't even eat the food," wrote one user. (Kardashian is seen taking a small bite out of a Beyond "chicken" tender.)

"Highly processed but sure it's good for you," wrote another.