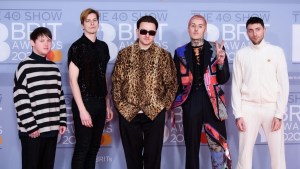 Rock band Bring Me The Horizon has announced the launch of a vegan BBQ hot sauce with artisan brand, Lou’s Brews.

Syko Juice, complete with a ‘spicy kick’, is available this month online.

Bring Me The Horizon

And, the hot sauce partnership follows in the footsteps of the fellow band You Me At Six, who have also released their own recipe with the company in the past.

Dubbed ‘the sauce of the summer’, it contains chipotle, jalapeno, ancho chili peppers, as well as onion, garlic, and rapeseed oil.

The company says it’s ‘the perfect way to crank your barbecues up to the next level’.

Sykes notably offered vegan burgers to fan at a gig in Sheffield, UK, two years ago – where the band was formed.

Bring Me The Horizon aren’t the only members of the rock scene making waves in the vegan movement.

Following the launch of Netflix’s Seaspiracy, the musician urged his followers to stop eating fish.

The post Bring Me The Horizon Launches Vegan BBQ Sauce With Artisan Brand appeared first on Plant Based News.