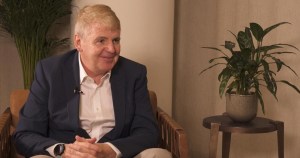 During an interview, he suggested establishing an industry association in the UK.

He said this would encourage government ministers and big businesses to put their expertise, knowledge, and investment behind the growth of alternative protein sources.

His book Moo’s Law explains the causes of radical change in human consumption of animal products.

In it, he makes predictions about future scenarios by sharing motives, which mobilize and encourage key players to take part in the revolution.

While being interviewed by Plant CEO, Mellon shared how his love of dogs inspired him to love all animals and question the treatment of intensively farmed land animals.

He stopped eating meat six years ago but revealed he still eats fish once a week. However, he claims he is gradually weaning himself off.

Mellon has made a number of predictions across social media in recent months regarding the collapse of the meat and dairy industries.

As an investor Mellon ensures his company, Agronomics, doesn’t invest in anything that promotes animal cruelty. He is the largest shareholder in Agronomics.

The company aims to remove animal cruelty from the food supply chain by developing cell-cultured meat.

He claims a lot of big firms aren’t doing enough to battle climate breakdown. And, that the food industry can make a difference.

“Big food companies here in Europe like Unilever and Nestlé should be encouraged by investors of all types to accelerate the process of developing alternative proteins.”

He suggests establishing an industry association in the UK. This is to encourage government ministers and industry giants to listen to suggestions from people within the business industry.

“This has got to happen. This is not some sort of left or right project. This is a project that’s necessary for all of us on the planet. This should not be politicized. This should be a matter of national priority.”

There’s a growing number of companies making headway in the alternative meat and dairy market.

Mellon has invested in some of these through his $300 million dollar business, Agronomics.