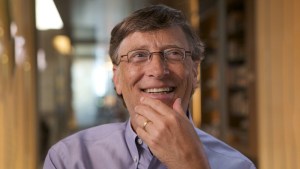 When asked what the ‘best burger in Seattle’ was – Gates replied: “I am eclectic. Dicks, Burgermaster, etc.. Seattle has a lot of good choices.

“I encourage people to offer synthetic beef as a choice.”

Gates, who has invested in plant-based brand Beyond Meat, promoted ‘synthetic’ beef throughout the Q&A as a solution to climate change.

When asked whether cell-cultured meat will ever ‘become widespread and replace livestock’ – he said: “If the cost of making synthetic meat comes down it might be competitive even without considering climate or animal welfare.

“There are two approaches – one is growing the meat in the lab (cells). The other is using plant material to make the meat. Right now the plant approach used by Beyond and Impossible is cheaper.”

Gates has been subject to a slew of conspiracy theories during recent years – most notably that he is implementing microchips in the COVID-19 vaccine in order to track people.

Addressing these theories, he said: “I am innocent! The whole thing about 5G and microchips is pretty crazy. Why would I want to do that?

“I do believe in vaccines which have performed miracles. My 2015 Ted talk was more viewed after the pandemic than before which is too bad.