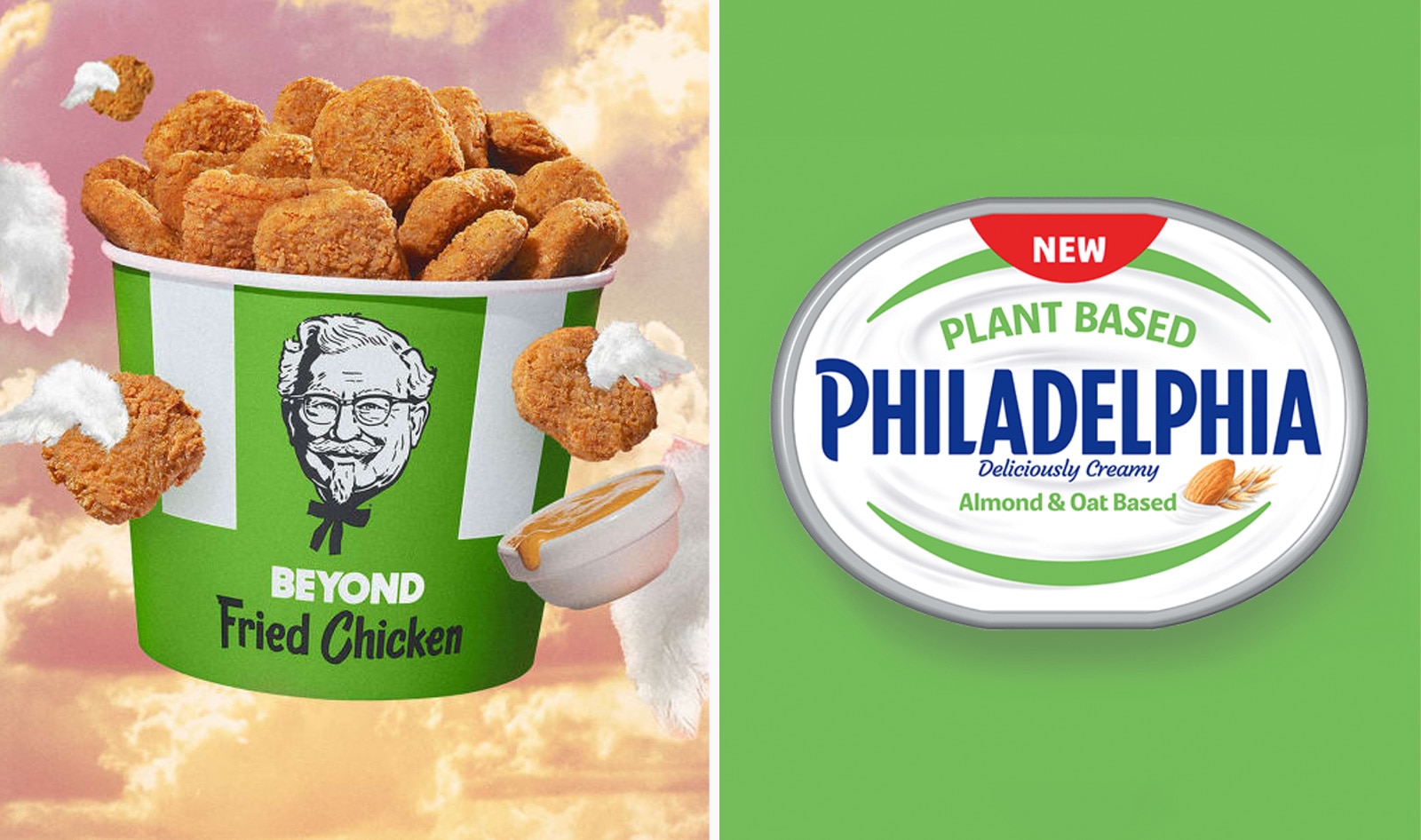 It seems that every week in the world of vegan food news is more exciting than the last and this week is no exception. This week’s headlines were dominated by fast-food chains and for good reason: KFC is finally serving vegan chicken at its locations across the US; Burger King just launched vegan chicken nuggets across the UK; and Domino’s UK is celebrating Veganuary with the launch of Vegan PepperoNAY, its first plant-based pepperoni pizza. With a new person signing up for Veganuary every 2.5 seconds, this January is off to a very vegan start. Read on for more.

The day has finally come: vegan fried chicken is now at KFC. After two years in development and several smaller test launches, KFC’s vegan fried chicken is finally available at its 4,000 locations nationwide. The new option is made in partnership with Beyond Meat and features all the flavor of KFC’s famous chicken but without any of the animal products.

KFC’s big news isn’t the only vegan chicken-related launch that happened this week. Canadian chicken chain Mary Brown’s also got into plant-based chicken with the launch of Lightlife’s vegan tenders, which are now available à la carte and as part of a “sidekick” sandwich at its 200 stores across Canada. And for Canadians itching for some vegan KFC, the Kentucky-based chain also serves Lightlife’s vegan chicken products at all 600 locations in Canada.

Over in the UK, KFC’s vegan chicken burger—which is made with bespoke Quorn patty—was temporarily removed from the menu after COVID hit. However, KFC has reintroduced the much-loved vegan chicken burger to its UK locations just in time for Veganuary.

Speaking of Veganuary, the campaign to get people to try vegan for the month of January and beyond is in full swing. This year, Veganuary counted its 2 millionth sign-up and every 2.5 seconds, someone new is pledging to give the vegan challenge a try.

The UK-based campaign is also gaining a lot of support from fast-food chains this year, which have launched items to help Veganuary participants maintain their plant-based pledges. This week, Burger King became the first fast-food chain to serve vegan chicken nuggets across the UK. The new nuggets are courtesy of Burger King’s plant-based food partner The Vegetarian Butcher, a Dutch brand owned by Unilever. The new vegan nuggets are part of Burger King’s greater plan to achieve a 50-percent reduction in animal meat served on its menu by 2030.

Domino’s is also stepping up its Veganuary game this year with the launch of Vegan PepperoNAY pizzas. It’s first vegan pepperoni pizza in the UK, the new pork-free pepperoni is also made by The Vegetarian Butcher. The new pizza joins a slew of choices at Domino’s UK, including the vegan chicken-topped This Chick-Ain’t Pizza that it launched for Veganuary last year.

And it’s not just the UK that’s having all the Veganuary fun. Chipotle is betting big on plant-based chorizo and just added its housemade protein to its 2,700 stores across the US after a short test launch last year. The new spicy vegan chorizo (which is Chipotle’s second vegan protein option next to its sofritas) is made from a base of pea protein that gets its heat from a blend of ancho chilies, chipotle peppers, and Spanish smoked paprika.

In addition to fast-food chains, Veganuary’s influence also reaches the consumer goods space. This year, iconic cream cheese brand Philadelphia has launched a vegan version of its best-selling cream cheese at Tesco stores in the UK. Made from an oat and almond base, Philadelphia promises its plant-based cream cheese is just as creamy as the original.

“With over half a million people taking part in this year’s Veganuary, the appetite for plant-based alternatives has never been more apparent,” Louise Stigant, UK Managing Director of Mondelēz International, which owns the UK arm of the Philadelphia brand, said in a statement. “We’ve worked hard to make sure new Philadelphia Plant Based really delivers the same great taste and creaminess that people love and expect from Philadelphia and we’re delighted that there’s now a Philadelphia product for everyone—not a bagel or slice of toasted sourdough ever needs to go without again.”

VegNews reached out to Philadelphia’s US parent company Kraft Heinz to inquire about its plans to launch a vegan cream cheese stateside. Stay tuned!

A vegan Twix copycat? No whey!

Accidentally vegan chocolate bars are a thing (here’s our complete guide) but, unfortunately, traditional Twix contains dairy. However, the chocolate experts over at vegan brand No Whey just released cleverly named “No Tricks,” an entirely vegan candy bar inspired by the original Twix. The new vegan confection features cookie bars layered with gooey caramel and coated in vegan milk chocolate and are sold two to a pack, just like the original.

The No Tricks bars sold out within a few hours of launch but No Whey is diligently restocking them to give customers a taste of vegan Twix. This week, the brand also opened the No Whey Bakeshopin Howell Township, NJ where it offers cookies, breads, baked goods, and other desserts. The shop also serves as the brand’s retail outlet where it offers No Tricks bars for your Twix fix, as well.

But what about vegan ice cream?

If all this talk of vegan chicken, pepperoni, chorizo, and cheese has got you craving a little dessert, Cold Stone Creamery is here to help. This week, the ice cream chain—which previously offered a variety of sorbets—launched its first-ever vegan ice cream option: Silk Chocolate Almondmilk Frozen Dessert. Cold Stone Creamery is known for its unique ice cream experience, where customers choose a base and mix-ins which a team member folds into a customized creation atop a frozen stone. Now, those searching for dairy-free options can play, too.

Oh and Ben & Jerry’s also launched two new vegan flavors this week—Boom Chocolatta and Bananas Foster—bringing its non-dairy portfolio up to 40 percent of its whole ice cream business. We’re betting that 2022 will be full of new vegan ice cream possibilities.

Mercedes-Benz New EV Cuts Carbon Footprint in Half with Vegan Leather
This Year, Someone New Is Signing up for Veganuary Every 2.5 Seconds
Domino’s UK Just Launched Its First Vegan Pepperoni Pizza at 1,200 Stores