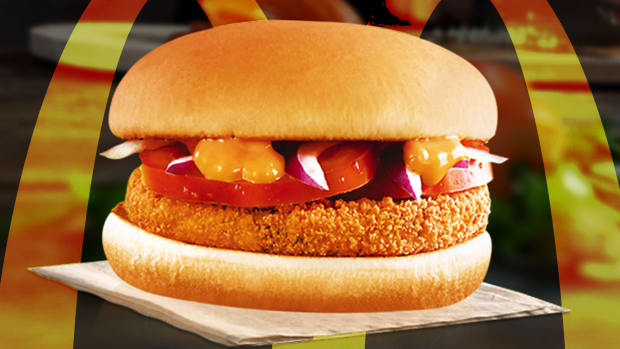 The chain has lots of meat-free options, but you may need to travel to find them.

As North Americans wait for the McPlant to come to their city, many forget the veggie burgers that have made McDonald's  (MCD) - Get McDonald's Corporation Report a hit in India.

With a menu that diverges from the American version more than perhaps any other country, McDonald's India already has at least five vegetarian burger options on its regular menu. This week, the chain drew attention to two of them when it posted a photo of the McAloo Tikki and the McVeggie as the "truly Indian burger" on Twitter  (TWTR) - Get Twitter, Inc. Report.

"Ingredient 2: The one that holds the fort for our and sourced from Maharashtra," McDonald's India wrote on Twitter as part of an invitation to guess what it was. Many fans piped in to identify the bun in the comments.

Since its launch in 1996, the McAloo Tikki became an instant best-seller and the most popular item on the McDonald's India menu; along with a regular and tikki version, the pea-and-potato patty regularly gets limited-edition revamps such as the Mexican McAloo Tikki with salsa and jalapeños.

The McVeggie, in turn, launched in 2012 when McDonald's opened its first vegetarian-only restaurant in India. The patty, made of a combination of peas, corn, carrots, green beans, onions, potatoes, was meant to provide an alternative to the McAloo.

The McVeggie has proven to be so popular that McDonald's restaurants in countries like New Zealand, Australia, Switzerland, and Hong Kong have also put it on their menus as both limited-time and regular items over the last decade. (The United States, which is only now testing the McPlant in select cities, is notably absent from this list.)

Even though those two burgers are the most popular well-known worldwide, McDonald's India has plenty of other veggie options such as the Salsa Bean Burger or the hashbrown placed inside a whole-wheat bun. While not plant-based, the McSpicy Paneer is another very popular burger for those who would rather have cheese in place of the patty.

Why Are There So Many Veggie Options In India (And So Few in the U.S.)?

Even as competitors like Burger King launched veggie burgers as early as 2016, the American McDonald's has been very slow to offer a plant-based option. The McPlant, which the chain first started testing in November 2021, is rumored to closely replicate the taste of beef through the Beyond Meat  (BYND) - Get Beyond Meat, Inc. Report patty.

The Indian versions, in turn, do not try to mimic the taste of meat but provide something unique using vegetables and legumes. In a country where as much as 39% of the population identifies as vegetarian, providing tasty vegetarian options has become critical to the fast-food chain's success.

"When McDonald’s arrived on Indian shores in 1996, the idea of tailoring an international menu to local tastes and palates was an alien one," McDonald's India once wrote in a blog post about the McAloo Tikki. "Its runaway success underlined the power of combining Indian ingredients and cuisines with global cooking techniques, a practice that later also resulted in such McDonald’s India superstars as the Chicken Kebab Burger, Chicken Chatpata Kebab Naan, McSpicy Paneer Burger, and the McSpicy Fried Chicken."