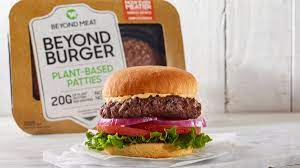 This article was originally published by Verity News Now.

Plant-based meat products maker Beyond Meat (BYND) reports first-quarter earnings after the close today, as it expands in restaurants and grocery stores but faces more competition. Beyond Meat stock fell. The company also reports just days after Tyson Foods (TSN) debuted new plant-based burgers, sausages and imitation ground meat in U.S. grocery stores — a sign of bigger rivals moving in as interest in plant-based meat products grows. Tyson, in its announcement, said that “While there are more plant-based options available for consumers today, few are made for those looking to fire up their grills.”

Estimates: Wall Street expects Beyond Meat to swing to a loss of 27 cents per share from a year-ago profit of 3 cents a share, while sales increase 18% to $114.35 million. Results: Due after the close. Beyond Meat also faces more competition from the likes of Impossible Foods, and bigger producers. That competition arrives as people prepare to barbeque this summer — one where interactions will likely still look different due to the coronavirus pandemic. Beyond Meat’s new Beyond Burger also debuted in grocery stores nationwide this week. Over the past month, the company also announced a large retail expansion in Europe, and began making meatballs, breakfast sausages and other products newly available at big U.S. grocery chains. It also opened a production plant in China. Find The Latest Stocks Hitting Buy Zones With MarketSmith

Shares fell 2.7% to 117.07 in the stock market today and have fallen steadily since January, when they reached their highest level since the summer of 2019. IBD’s ratings for Beyond Meat’s stock are weak: a Composite Rating of 5, of a best-possible 99, and an EPS Rating of 3. The relative strength line of Beyond Meat’s stock has fallen since January as well, and shares are now below both their 50-day and 200-day lines, according to MarketSmith chart analysis. The company in February announced multiyear deals to offer plant-based menu items at McDonald’s (MCD) and Yum Brands (YUM), which runs KFC, Pizza Hut and Taco Bell. Beyond Meat stock rallied on the news. In January, Beyond Meat announced plans to form a joint venture with PepsiCo (PEP) to make snacks and beverages from plant-based protein. The coronavirus pandemic hurt Beyond Meat’s business with restaurants, which had to restrict service last year due to the crisis. The company shifted business to grocery stores in the process. Along with Tyson, companies like Kellogg (K) and Hormel (HRL) also offer plant-based meat products. But even as rivalries increase and Beyond Meat stock falls, some analysts remained upbeat. “Competition in alt protein is heating up and is coming from well-established food companies,” Stephens analyst Mark Connelly said in March in an initiation note on Beyond Meat stock. “Yet Beyond is one of only two companies that we think will define the high end of the market.” YOU MAY ALSO LIKE: Moderna Crashes As Sales Lag Estimates In First Profitable Quarter Fido’s Drugmaker Slammed Despite Easy Beat On Growing Pet Sales Looking For Market Insights? Check Out Our IBD Live Daily Segment Peloton To Report After Treadmill Recall, CEO Apology Is Uber Stock A Buy Right Now After Reporting Earnings?
Most Related Links : verity news now Governmental News Finance News Source link The post Beyond Meat To Report After Real-Meat Giant Adds To Competition appeared first on veritynewsnow. plant-based beyond meat impossible foods meat burgers beverages burger protein stocks shares