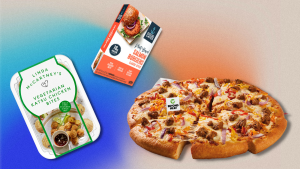 We’re back again with all the thrilling vegan food launches of the week that you should keep an eye out for from restaurants to supermarket shelves this Veganuary.

Ready for all your Veganuary needs, here are some sensational drops from the likes of Beyond Meat, Linda McCartney, and Good Catch. There are also some hot new plant-based ranges from Morrisons and Danish Crown.

Global vegan meat titan Beyond Meat is teaming up with Pizza Hut to adorn Beyond Italian Sausage Crumbles on pizzas across Canada – only this time it’s permanent.

The addition will be a consistent fixture at all locations nationwide, as a vegan version of Pizza Hut’s traditional Italian pork sausage topping. And, were specifically designed to mimic the meaty texture and “mouthwatering” savory taste only in plant-based form.

In a press release, the companies confirmed they are “thrilled” to work together on their shared vision of making all guests happy.

Beyond Meat’s products will feature on Pizza Hut’s menus in the form of The Great Beyond pizza, Beyond Italian Sausage Alfredo Loaded Flatbread, and the Beyond Creamy Alfredo.

Whilst in the UK and Australia Pizza Hut offers vegan bases, this isn’t the case for Canada. According to the chain’s allergens menu, all dough bases contain milk.

One of the UK’s biggest supermarkets, Morrisons has made its foray into veganism with the launch of its Plant Revolution brand.

There are also ready meals such as Udon Cauliflower, Veg Paella, and Mushroom Spag Bol.

It’s been certified by The Vegan Society’s Vegan Trademark.

British pizza restaurant group Pizza Express has launched a vegan version of its iconic garlic butter in time for Veganuary this year.

It followed “thousands” of requests. And alongside, a mammoth fountain of the stuff has been launched at the chain’s all-vegan outlet in Aldwych, London. Here, 2kg of the garlic spread pours out, which is enough to dunk one hundred Dough Balls.

This will be later rolled out in Pizza Express’ 360 restaurants nationwide come March.

The new vegan butter is available with its classic Dough Balls or as a dip for “essential” crust dipping.

Food and beverage director Jane Treasure said: “With more and more people opting for vegan alternatives every year, we’re excited and proud to be able to announce the launch of our vegan garlic spread this Veganuary.”

Leading meatless brand created by the late Linda McCartney of the same name has launched nine new products across multiple lines for Veganuary 2022.

The Ready To Eat Range can be found in Sainsbury’s, Asda, and Waitrose.

Mexican-inspired restaurant chain Wahaca has established an entire vegan set menu this Veganuary. It’s available across its 13 outlets and via Deliveroo.

There are also tostadas in Zesty Bean and Organic Squash. You can also order Wahacomle, a “sustainable” take on guacamole made with British fava beans.

“As well as making sure that our vegan offering is the most varied and most delicious it ever has been, we’re determined to continue pushing ourselves to tread as lightly on the planet as we can throughout 2022,” commented co-founder Thomasina Miers.

Plant-based seafood brand Good Catch is launching Plant-Based Salmon Burgers, which are produced in the US.

The company, Gathered Foods, says they deliver on the “best part” of salmon in texture and flavor while boasting 16 grams of protein per serving.

Chad Sarno is co-founder and chief culinary officer at Gathered Foods. In a statement, he said: “We are excited to see consumer response to our Plant-Based Salmon Burgers, which provides a convenient meal solution without the harm.”

The new burgers are available through a partnership with United Natural Foods, a North American grocery distributor.

One of Denmark’s top beef and pork processors, Danish Crown, is debuting its first plant-based products under its Den Grønne Slagter brand.

“When we diversify, it is important to us that we are able to offer products that taste good. And, are easy for consumers to prepare,” the company’s group CEO Jais Valeur said in a statement.

Customers can find the products in supermarkets across the country.

Retailer Costco has made a new vegan chicken product from Plant Alternative available across its UK stores. Shicken’s Tikka Kebab Skewers are now on offer up and down the country.

Made with textured soy fiber, the frozen skewers are marinated in a tikka spice mix. Shicken’s founder Satvinder Bain reportedly spent two years developing the product alongside a team of chefs.

Elsewhere in all things tikka, Supermarket giant Sainsbury’s has joined forces with plant-based pioneer THIS on a new product this Veganuary.

The new THIS Isn’t A Chicken Tikka Roll is available in the on-the-go food section. a

It comes complete with kachumber, a mango chutney, and black onion seeds – retailing at £3.50 across more than 900 stores.

US ice-cream parlor Cold Stone Creamery has unveiled its first vegan ice-cream offering, made with almond milk from Silk.

The plant-based frozen dessert is called the Don’t Cry Over Spilled Silk Creation. And it comes in chocolate, banana, peanut butter, and roasted almond.

However, Cold Stone Creamery maintains that the new dessert is not made in a vegan environment. It warns that cross-contamination “could occur.”

The offering joins a range of vegan sorbets and mix-in toppings such as nuts, pretzels, and Oreo cookies.