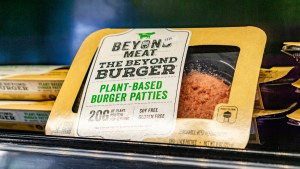 Beyond Meat has launched an online store in China in order to make plant-based meat products more accessible.

It follows the brand’s continued expansion in the country in recent years.

The store was launched on the eCommerce site JD.com, one of China’s largest of its kind. Now, customers will be able to purchase the Beyond Burger, Beyond Beef, and Beyond Pork.

This came after the product was specifically designed for the Chinese market – at 50 percent less saturated fat than conventional ground pork.

The range is produced in the company’s newly opened facility in Jiaxing.

Beyond Meat’s Total Revenue Has ‘Potential’ To Exceed $1 Billion By 2023, Say Experts

Candy Chan is Beyond Meat’s China General Manager. In a statement, Chan said: “Beyond Meat is excited to launch its store on JD.com to expand our local availability and reach consumers throughout China.

“With increased capabilities thanks to our new manufacturing facility in the JXEDZ, we are able to offer a growing portfolio of great-tasting, locally-produced plant-based meat products that are nutritious and sustainable.”

The launch comes less than a year since Beyond Pork debuted in China. Initially, it was available at a handful of restaurants. The decision came since the country is the world’s largest consumer of pork per capita.

Moreover, Beyond Meat has been available in China for just 15 months when it entered the market through a partnership with Starbucks China.

Currently, only customers in Beijing, Shanghai, Guangzhou, and Shenzhen can purchase the products.

However, the brand says it has plans to soon expand into 300 cities across the country.