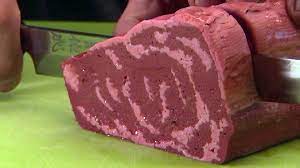 Beyond Meat has raised the “steaks” again for the plant-based industry. The company, founded in 2009, announced a new sliced steak product earlier this month, expanding its selection of vegan alternatives to meat.

Going above and beyond in the plant-based meat market

Beyond Meat, which already sells plant-based burgers, sausages, meatballs and tenders, plans to release the new product later this year, CEO Ethan Brown recently told Jesse Newman of the Wall Street Journal. The plant-based steak option, unlike its predecessors, is intended to replicate an entire slice, rather than mimic a ground texture like most of its existing meat analogs. Consumers will be able to purchase the steak slices in stores and online, but they’ll have to wait a while before the meat becomes a restaurant staple as the Beyond Burger’s appearance on menus has emerged in recent years. The brand is following the lead of other companies, such as Juicy Marbles, which are going beyond “burgers” and are starting to roll out plant-based steak alternatives.

Beyond is one of the leading plant-based protein producers in the market, but like many companies, it is confronting its own share of struggles amidst disruptions like the global pandemic, worries about the viability of the food service sector and supply chain shortages. Over the past two years, as restaurants reduced the number of options on their menus or closed altogether, companies like Beyond found itself ramping up their presence in the retail space. Yet the company has found that investors have been skittish about adding Beyond to their portfolios. As it confronted the pandemic’s lingering impacts, including rising grocery prices, Beyond has seen its stock crater by about 80 percent since last summer — and that’s after a slight rebound this week. Competition with other plant-based companies like Impossible Foods has also contributed to Beyond’s recent struggles in the market. Brown, however, is optimistic as the company emerges from the pandemic and expects profit margins to improve, especially after consolidating operations and reducing transportation costs.

What’s next for Beyond Meat?

Regardless of brand, public debate over whether or not plant-based meat is really a healthier alternative to animal meat has added fuel to the fire, with critics labeling such food as an “ultra-processed imitation.” For its part, as the company strives to create meatless products that are indistinguishable from animal versions, Beyond is candid with nutritional information, touting simple, non-GMO ingredients and knocking nay-sayers. Although it’s unclear if struggles resulting from the pandemic will be long-lasting, Brown is positive that consumers’ hunger for healthy plant-based food alternatives will prevail. Given the popularity of plant-based food options, Brown is correct. An estimated one in five Americans identify as flexitarian, providing a hopeful sentiment for Beyond and other plant-based companies as a whole. Image credit: Felix Wolf via Pixabay plant-based beyond meat impossible foods meat burgers burger protein alternative investors industry