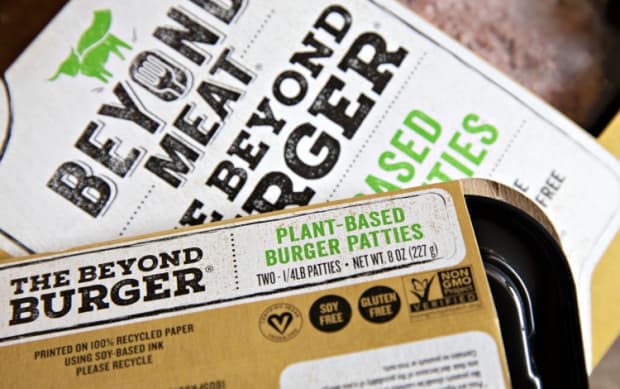 Move over Beyond Meat, the fast-food chain has gone beyond meat in a way that's not a fake burger.

Beyond Meat (BYND) - Get Beyond Meat, Inc. Report and Impossible Foods sell plant-based burgers designed to mimic meat. They offer fake hamburger patties made of plants that "bleed" like traditional burgers which, in theory, should appeal to people who want beef, but might consider making a healthier choice.

That's potentially a market, but there's also an audience of vegetarians and vegans not looking to capture the taste of something they don't eat anyway. In that sense, Beyond Meat and Impossible are marketing to a limited audience -- people who want less meat for either health or environmental reasons.

Now, however, the fast-food chain has a menu item (albeit in Japan) that uses plants but allows the key ingredient to stand on its own. It's a meat-free, plant-based burger that either goes back to basics or beyond Beyond Meat.

Burger King Japan has introduced the Guilty Butter Croquette Sandwich for a limited time in Japan, Brand Eating reported. The sandwich uses a fried potato patty instead of a burger.

The Guilty Butter Croquette Sandwich has " a crispy-fried potato croquette patty filled with butter as well as a butter-infused artisan burger bun. Along for the ride are pickles, lettuce, onion, mayo, and a cheddar cheese sauce. It's basically a buttery, crispy-fried mashed potato sandwich," explained Brand Eating.

This formula veers from the U.S. model of marketing plant-based as healthy or at least implying it because Beyond Meat and Impossible products are often not healthier than the meat they replace.

This sandwich, as its name implies, wants to make people feel guilty for eating it due to the high butter content in both the bun and the fried potato patty. That might be a challenging marketing concept in the U.S. but its introduction opens the door for a broader interpretation of what a plant-based sandwich might look like.

Beyond Meat Has Struggled

The company struggled mightily in its most-recent quarter and CEO Ethan Brown attempted to explain why during Beyond Meat's third-quarter earnings call.

"The headline for the third quarter relative to our expectations at the onset of 2021 is that it was a difficult operating environment, highly variable demand, reflecting the Q2 retreat and then Q3 reemergence of COVID in the form of the Delta variant, sustained labor shortages impacting certain customers, as well as our own facilities and other high-impact supply chain disruptions are among the challenges characterized in the quarter," he said,

It's also possible -- although the CEO would never say it -- that plant-based meat has become commoditized and Beyond Meat might not have enough secret sauce to maintain a competitive advantage. Brown does believe that the pandemic has caused many, if not most, of his company's issues and that he has a strategy to return to major growth.

"For our business, the extent that moving from test to fuller launches with our strategic QSR partners is an important contributor to our revenue build, the combined contribution of COVID's long tail and related labor shortages have had a particularly disruptive though we expect transitory impact on our growth trajectory," he said. "In short, as we plan 2021, we held cautious expectations by the second half of the year, we'd have our footing back in foodservice and specifically be more active with many of our QSRs."