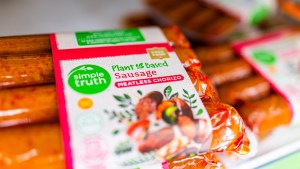 Australia is launching an inquiry to decide whether it will ban the use of plant-based ‘meat’ labels.

The politician, and former butcher, argues meat-free brands should be prohibited from using terms such as ‘mince’ and ‘sausages’.

She argues Australia’s meat industry should have ‘sole use of product names that have meant only one thing for centuries’.

According to 7News, McDonald added: “If you prefer tofu over T-bone, then you go for it – but forget the ethics of eating animal products.

“This is about protecting a highly valuable industry and also providing a clear distinction between the real thing and the alternatives so consumers know exactly what they’re getting.”

House Bill 316 was okayed by lawmakers in May to prevent brands ‘misleading consumers’.

The bill strictly defines ‘beef’ and ‘chicken’ as ‘any edible portion of a formerly live and whole cattle/ chicken carcass, not derived by synthetic or artificial means’.

Similarly, it says the label ‘meat’ must not contain any lab-grown, cell-cultured, insect, or plant-based food products.

If passed, the legislation would have required vegan brands to use terms such as ‘veggie disc’ instead of ‘burger’.

Despite politicians’ arguments that plant-based labels are confusing to consumers – a new empirical study found otherwise.

The research – conducted by Cornell University – has been published in the Journal of Animal and Environmental Law.

It found ‘consumers are no more likely to think that plant-based products come from an animal if the product’s name incorporates words traditionally associated with animal products than if it does not’.

Moreover, it argues ‘omitting words that are traditionally associated with animal products from the names of plant-based products actually causes consumers to be significantly more confused about the taste and uses of these products’.