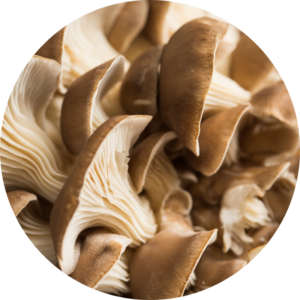 I’ll make the matters quick: Of course, they are! But there may be some gray areas you should learn about these great protein sources. After all, veganism transcends eating habits. It also calls for an awareness of how food is processed — whether they’re ethical and sustainable. Check out our other blog, “Are Oysters Vegan?” for another hotly debated topic when it comes to plant and animal protein.

Why Some Mushrooms Are Vegan

Sure, they are alive, but they’re neither plants nor animals. Mushrooms belong in a whole different classification, the Kingdom Fungi. They are stationary like plants, but they can’t produce their own food via photosynthesis. Instead, some mushrooms need other organisms as food sources.

Does that mean they’re animals?

More than 200 species of mushrooms, including oyster mushrooms, ensnare and digest animals, like nematodes. However, most of them are saprophytic, which means they live off of decaying organic matter from plants, animals, or other fungi.

Despite this, they still can’t be classified as animals as they don’t have a nervous system, which makes the members of Kingdom Animalia feel pain. So whatever they consume to survive, mushrooms won’t feel pain if you chop them and put them in your risotto.

Truffles are obviously mushrooms, and therefore, vegan if you only consider what it is. However, truffle hunting involves the use of truffle dogs or pigs, and this process can sometimes poison the animals if they caught or ate another species of a similar-looking mushroom.

Further, the competitive market of truffles in some countries results in inhumane training of dogs or pigs. Therefore, most vegans stay away from truffles.

Should You Include Mushrooms In Your Vegan Diet?

Being a great source of proteins, vitamins, minerals, and fibers, mushrooms are definitely beneficial to the body and have long been recognized as an important part of any diet. If raised with exposure to UV light, they may also be a great source of Vitamin D, a nutrient most people are lacking nowadays.

Mushrooms have great taste and texture that can substitute the savory taste of meat. What’s more, they don’t have the extra calories and unhealthy fats that you’ll see in animal protein. With a combination of exercise and lifestyle changes, eating mushrooms can also help with weight loss.

Plant-based protein sources like mushrooms can even lower your blood pressure reducing the tension in blood vessels. Further, they can boost the immune system by stimulating the macrophages, important cells in the immune system that can ingest foreign bodies and other harmful substances and flush them out of your body.

Lastly, you don’t have to worry about the environmental impact of eating mushrooms. They grow easily in the right environmental condition and won’t need several resources for their growth. Some can even proliferate in vertical farms.

You don’t have to sacrifice flavorful meals for your vegan lifestyle. Instead, add more savor into your dishes with ethically sourced ingredients like mushrooms.

The post Are Mushrooms Vegan? appeared first on PlantX.