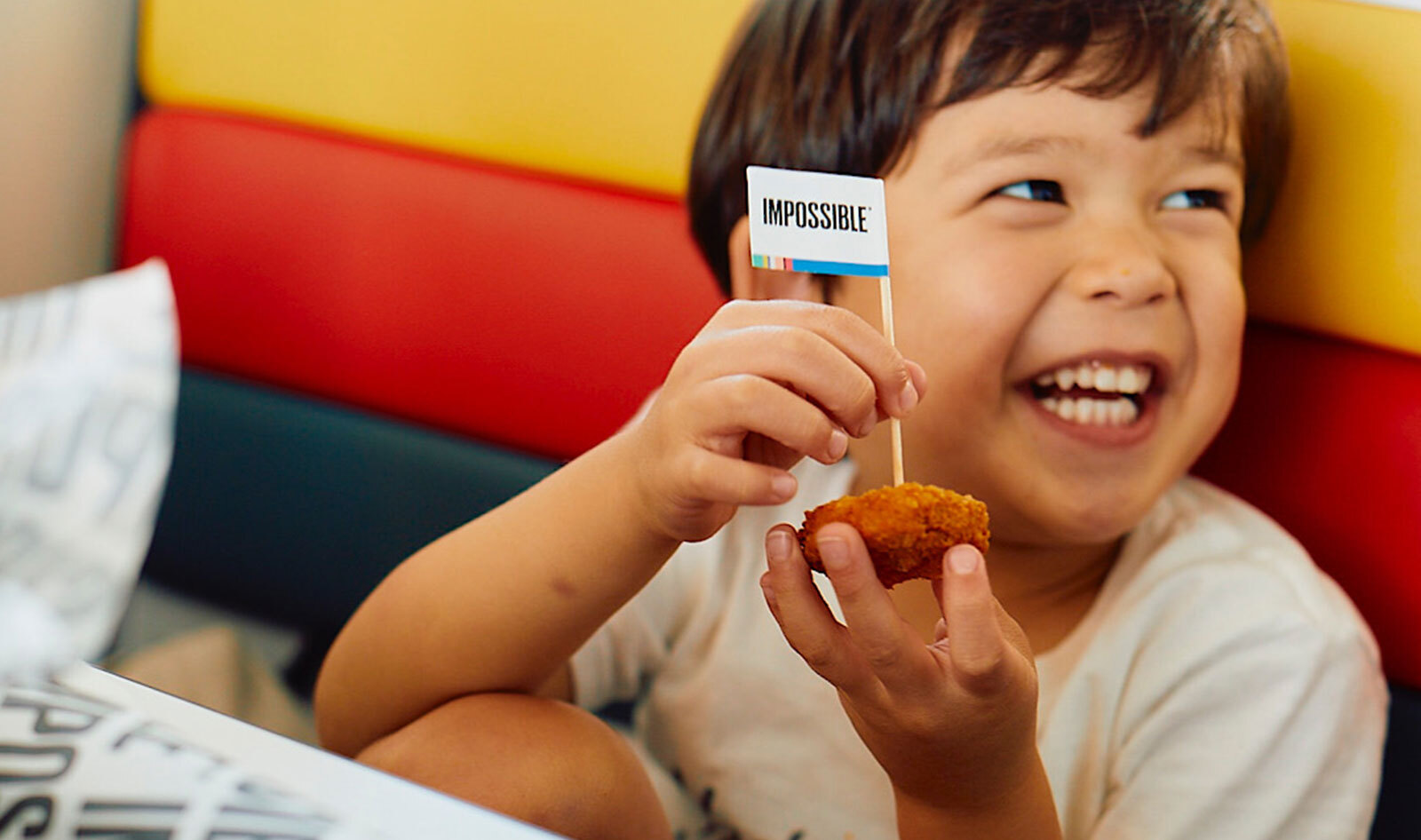 Plant-based brand Impossible Foods is launching two new plant-based meat items specifically designed for K-12 school lunch menus. With the new products, the brand aims to provide students with nutritious plant-based alternatives to their favorite meals that would otherwise be made from animals. At the School Nutrition Association Annual Conference in Orlando, FL this week, the brand is launching a fully cooked Impossible Burger Patty, making it easier for school cafeterias to serve nutritious plant-based school lunches. The new pre-cooked patty was designed specifically for K-12 cafeterias, which typically need to reheat cooked food rather than cooking from raw ingredients, and offers a balanced nutritional profile and a Child Nutrition (CN) label to meet young people’s nutritional requirements. The fully cooked Impossible Burger patties can be easily reheated a variety of ways depending on the facilities available at each cafeteria, including in a convection or conventional oven, on a non-stick griddle, in a microwave, or in a TurboChef Tornado (a cooking appliance often used in food service kitchens). In addition to the new fully cooked patty, Impossible Foods is also previewing all-new, whole-grain Impossible Chicken Nuggets at the School Nutrition Association conference. The new nuggets, which will launch in the second half of the 2022 to 2023 school year, offer the same flavor as the brand’s original Impossible Chicken Nuggets but offer five grams more fiber per serving because of the whole-grain coating. Additionally, the new whole-grain nuggets provide 13 grams of protein per serving and 40 percent less saturated fat compared to traditional school lunch chicken nuggets made from animals. “It’s great to see more states and school districts leading the way to bring plant-based meals to school lunch programs. We created these new products so students won’t have to give up their lunchtime favorites in order to have well-balanced, plant-based meals at school,” Laura Kliman, Impossible Foods Director of New Product Development, told VegNews.

The launch of Impossible Foods’ new kid-friendly products follow a historic $700 million investment by the State of California to support plant-based school meals across the state. As part of the budget, $100 million will be used to support schools in procuring plant-based foods, as well as sustainably produced foods, California-grown foods, and foods to accommodate the dietary needs of students. An additional $600 million will be invested in upgrading school kitchen infrastructure and in training and compensating food service workers, who will be tasked with preparing new plant-based meals and increasing scratch-cooking. “I am very excited to see plant-based school meals included in this year’s budget. Having this optional program for schools, in addition to their existing meat and dairy menus, will allow for an inclusive selection for our students,” Assemblymember Adrin Nazarian (D-Van Nuys) said in a statement. “Many school districts across our state have a sizable student population that requires or wants plant-based or restricted diet options and cannot afford the sometimes-higher prices. This year’s budget is a sizable step towards empowering schools to respond to their students’ needs.” The new funding comes after a years-long effort by Assemblymember Nazarian, school districts, parent groups, and nonprofits in the environmental, health, and animal-rights sectors, to implement a new program (AB 588) that would incentivize California schools to expand plant-based options. Under the program, state funding will be used to reimburse K-12 public schools for the costs of expanding their plant-based food and beverage offerings.

Last year, Impossible Foods became certified for school lunches for its Impossible Burger, followed by its Sausage breakfast patties. This includes securing a CN label—an accreditation from the United States Department of Agriculture—which allows the two Impossible products, both patties and bulk, to be served for breakfast and lunch in K-12 schools nationwide. At the time, Impossible Foods kicked off a pilot program at school districts nationwide and donated cases of its plant-based meat products to these districts to allow them to create innovative dishes for students, such as Impossible Street Tacos, Impossible Frito Pie, and Spaghetti with Impossible Meat Sauce. Students provided their feedback on these options via surveys to assess the success of the pilot program. Currently, nearly 500 schools across the United States already serve Impossible Sausage breakfast patties and ground Impossible Beef, and five of the country’s largest 10 school districts have expressed interest in featuring Impossible Foods in their cafeterias. “Our new fully cooked Impossible Burger patty and whole grain breaded nuggets make it seamless for school kitchens to serve plant-based meals that are better for students and the environment,” Kliman said. “Nutritious food is critical to child development, but it doesn’t have to come at the expense of tasting good or the future of our planet.” For the latest vegan news, read: Plant-Based Meat Can Better Address Climate Change Than Electric Cars America’s Youngest Yogi Just Opened a Vegan Food Truck Sophia’s Famous Lasagna Goes Vegan At ‘Golden Girls’ Pop-up in Beverly Hills plant-based impossible foods meat chicken beef sausage burger protein funding investment