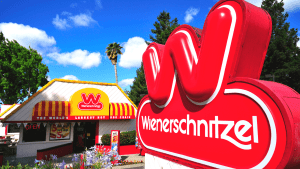 The double-smoked vegan meat is made from brown rice, pea, and fava bean protein.

And the Backyard is served with tomato, ketchup, mustard, and a pickle spear. This option also comes with dairy-based cheese, so those wishing to eschew animal products must request it without cheese.

An ever-growing interest in plant-based food spurred on the launch, according to Doug Koegeboehn, Wienerschnitzel’s chief marketing officer.

“Veggie dogs are one of the highest requested items on our social pages, but we wanted to make sure we did it right,” they said in a statement. “After years of research, trials and market testing, we’re confident we found one that tastes amazing and our customers will love.”

The meat-centric chain first tested out the vegetarian hot dogs in areas like Los Angeles, El Paso, and Bakersfield. The trial was a hit, Koegeboehn said. “Vegetarians raved how delicious the flavors were and kept coming back for me. We hope our new customers are as happy with them as we are,” the chief marketing officer commented.

Dan Curtin is president of Greenleaf Foods, Field Roast’s parent company. He said the collaboration with the meat giant is “an honor.”

“Few foods stir passion like hot dogs, and we’re proud to satisfy that all-American hot dog craving for plant-based consumers nationwide  … It’s an honor to partner with such a popular and iconic restaurant chain where hot dogs aren’t just an option—they’re the menu’s focus,” Curtin commented.

Animal welfare charities, such as World Animal Protection, have applauded the collaboration.

Maha Bazzi, the organization’s farming campaign manager, said in a statement sent to Plant Based News: “We are thrilled to see the growing plant-based momentum in the US food industry. More plant-based options on menus nationwide helps encourage consumers to eat less meat and spare animal lives.

“We believe that a reduction in meat consumption can help put an end to cruel factory farming.”

This article was originally published on January 14, 2022. It was updated on January 17, 2022 to rectify information about the number of locations stocking the new products. The original figure was provided in a press release but PBN has since learned it was incorrect.