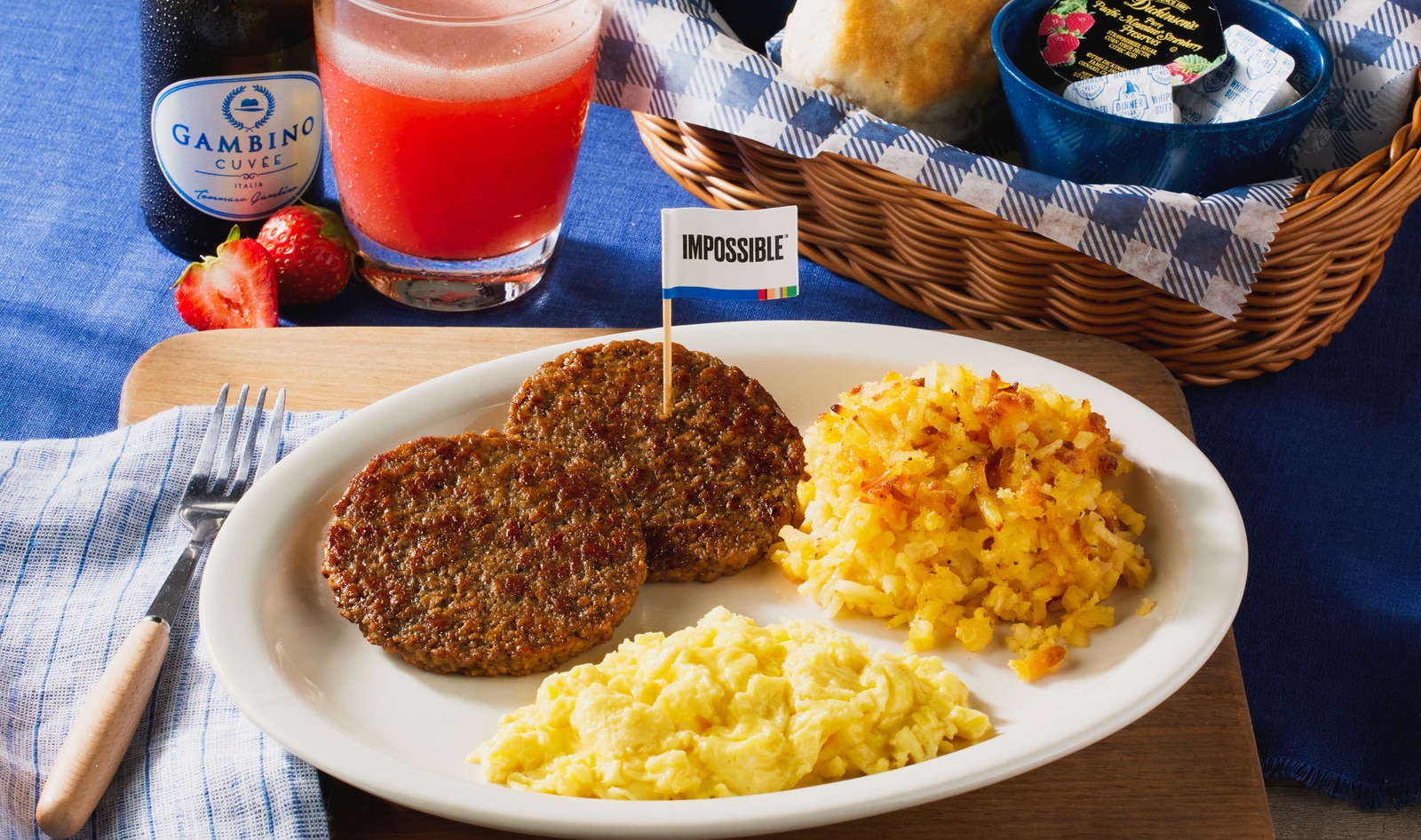 Cracker Barrel Old Country Store might not be the first place you go for a taste of Impossible Food’s plant-based sausage. But as of June 21, the iconic chain is a place people can go for it. This summer, the chain added Impossible’s plant-based sausage to its menu at its 600 locations. Patrons can now order the meatless option as part of Cracker Barrel’s new Build Your Own Homestyle Breakfast format (starting at $8.99, varies by location). This format consists of (non-vegan) eggs cooked any way, biscuits n’ gravy (also not vegan), and a choice of meat (where Impossible sausage is an option next to animal-derived sausage, bacon, and ham).

It should be noted that the Impossible sausage—Cracker Barrel’s first plant-based meat option—did not replace any menu items and was instead added as an option after a regional test proved demand.

“At Cracker Barrel, our all-day, homestyle breakfast menu is a staple that draws enthusiasm from guests of all ages, so we are always exploring opportunities to improve how our guests experience breakfast,” Sarah Breymaier, Director of Menu Strategy at Cracker Barrel, said in a statement in June. “Our new breakfast menu innovations provide a personalized experience with delicious breakfast choices to satisfy every taste bud—whether guests are nostalgic for homestyle food, hungry for a nutritious plant-based option or have a craving for a sweet treat. At morning, noon, or night, we want guests to enjoy craveable breakfast favorites at a compelling value.”

And while Cracker Barrel, which is based in Tennessee, is trying to explore new, in-demand plant-based options, the move has stirred up some controversy.

Cracker Barrel recently took to social media to promote its new plant-based Impossible sausage with a simple message. “Discover new meat frontiers,” the chain captioned a breakfast plate photo on Facebook. “Experience the out of this world flavor of Impossible Sausage Made From Plants next time you Build Your Own Breakfast.”

Since August 1, the seemingly benign post drew 12,000 comments, many of which condemned Cracker Barrel for adding plant-based meat and claiming that it was attempting to replace pork sausage. “You can take my pork sausage when you pry it from my cold, dead hands!!” one commenter said in all capital letters. “Don’t tread on my pork.”

Other commenters jumped in to defend Cracker Barrel’s decision in modernizing its menu with plant-based meat options. “The world is crumbling but let’s get mad that you have another option for breakfast,” one commenter stated.

And some commenters had a different viewpoint all together. “I’m a big meat eater but Impossible Burgers and Sausage are so good,” one commenter said. “I couldn’t even tell the difference. I think it’s great for people who can’t eat meat for whatever reason.”

For comparison, Cracker Barrel’s post on July 30—the day prior to the Impossible sausage post—about its cheesecake-stuffed pancakes only gained 78 comments, some of which came after from the Impossible Sausage controversy.

While the battle at Cracker Barrel over the addition of Impossible’s plant-based sausage rages on, the climate crisis—fueled in no small part by animal agriculture—is bringing some of the hottest temperatures ever recorded to regions across the world, including the American South. In mid-June when Impossible’s sausage hit the menu at Cracker Barrel, 16 states were under heat alerts and Nashville, TN—which is not far from Cracker Barrel’s Lebanon headquarters—recorded its first 100-degree day in nearly a decade.

A growing body of research is uncovering the vast impact animal agriculture is having on the environment, including a 2022 review published recently in the scientific journal Future Foods that examined 43 studies on the topic to conclude that plant-based meat is both healthier for humans and more sustainable than its animal counterpart.

“Plant-based proteins require a fraction of the land, emissions, and other harms associated with conventional meat products,” Maia Keerie, a spokesperson for nonprofit Good Food Institute (GFI), told VegNews. “By adding more plant-based options to their menus, restaurant chains offer consumers a more sustainable choice and the opportunity to choose products that align with their values.”

Demand for plant-based foods—motivated by environmental benefits, animal welfare, and health—is also strong, particularly when it comes to foodservice menus.

According to GFI, plant-based food sales amassed $7.4 billion in 2021, an increase of 54 percent since 2018. These statistics are helping chains such as Cracker Barrel understand how to implement changes on their menus to best serve their consumer needs, which are expanding beyond plant-based burgers and into new vegan meat categories.

“The plant-based burger continues to be a crowd pleaser, often being one of the fastest growing food orders, and now menus are rapidly expanding to include plant-based sausages, chicken, ground beef, and chorizo,” Keerie said. “By expanding the plant-based options on their menus, restaurants have been able to attract new and younger consumers and increase check averages, which is likely an attractive option for chains like Cracker Barrel.”