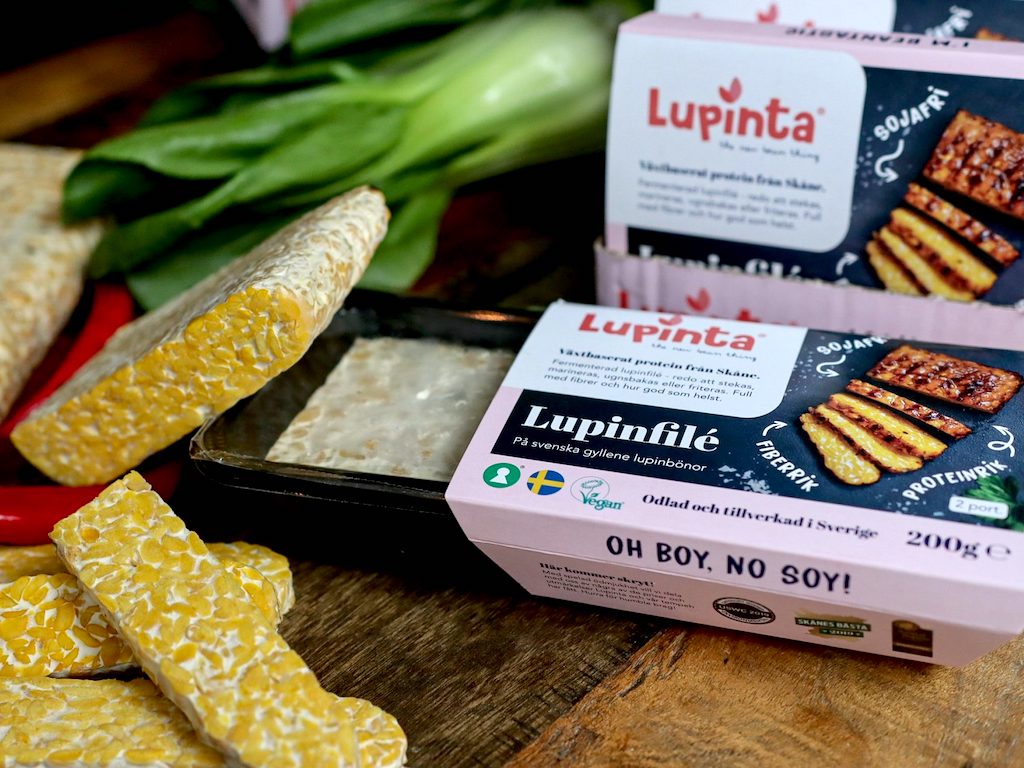 Lupin beans might just be the next big thing. But what are they? From sustainable alternative proteins to novel functional ingredients and nutrition-packed snacks, this mighty legume is now stealing the show in the food industry.

Lupin beans, also known as lupini beans, are a nutritional powerhouse. These round mustard-coloured beans are full of fibre, contain all nine amino acids, and are packed with vitamins and minerals like magnesium. Lupin beans, which the ancient Romans were big fans of, are also incredibly sustainable to grow, contributing to soil-friendly crop rotations.

For years, they’ve been eaten as a pickled snack, appearing on antipasti boards. But they haven’t gotten much of the spotlight. Now, food innovators are finding new ways to use this legume, and lupin beans are now all the rage.

One way startups are utilising lupin beans is ingredient innovation. They’re unlocking new kinds of ingredients with specific functional qualities and nutrition content. Wide Open Agriculture in Western Australia, for instance, are extracting high-grade proteins from lupin beans, which are widely grown in the region, traditionally only to feed livestock.

The company is now working with researchers at Curtin University to test how lupin-based protein can then be used as an ingredient in a range of food products like bread and pasta.

Over in Malaysia, ingredients supplier CK Ingredients has been using lupin beans to make its LuPro Lupin product. It’s one of the company’s top-sellers that helps brands boost the protein content of their foods, be it snacks or smoothies, and also acts as a replacement for starches in formulations.

CK, which described lupins as a “rebel bean”, touts the bean as a hero thanks to its keto-friendly qualities. For food brands, that’s a selling point that could help attract increasingly health-conscious consumers, many of whom are now trying out the popular diet trend.

Beyond the realm of ingredients, lupin beans are being converted into plant-based meats too. Especially as the vegan industry matures, more brands are differentiating themselves from the competition by using a more diverse range of plant crops. And they’re choosing lupini as one of them, instead of more widely used plant proteins like soy, wheat, and peas.

Eighth Day Foods has created Lupreme, which is made out of 100% whole-kernel sweet lupin beans. Using traditional fermentation processing, the startup harvests whole blocks of Lupreme, which tastes, looks, and cooks like animal meat that resembles chicken. It can be cut into fillets, formed into sausages, strips, or nuggets, or made into a mince alternative.

Another Swedish firm, Lupinita, uses the bean to make soy-free tempeh. Using locally grown lupin beans, the company ferments its own slabs of tempeh, which can be marinated, fried, and grilled just like its traditional soy-based counterparts.

There are even companies making egg and dairy alternatives using lupin beans. While Lupini Milk is using the bean to make 100% plant-based milk, Nabati Foods recently debuted its new vegan, gluten-free and soy-free liquid egg replacement that uses lupinis as its base.

Then there’s the rise of lupin snacks. Pioneering the trend is Brami, the company that launched convenient packages of lupin bean snacks on the market three years ago. Those on-the-go pouches, coming in several flavours like garlic rosemary and chilli lime, quickly became a hit on retail shelves.

They resonated especially well with the health-conscious consumer, who was becoming more discerning when it came to ingredient lists and wanted cleaner, shorter labels. Brami’s snacks contain only lupin beans that have been marinated to snacking perfection and naturally boast a high protein and fibre content.

Since then, more snacking innovations have come from the now-popular lupini. In New York, Lupii is making vegan-friendly, protein-packed energy bars using the legume, and combining it with other plant ingredients like cashews, ginger, cacao nibs and cranberries.

Lupii doesn’t want to stop at snack bars though. Armed with fresh capital through its crowdfunding campaign, the startup is now setting its sights on launching more lupin-based products that are perfect for grazing, from crisps to cookies.

The post What Are Lupin Beans? Meet The Superfood Transforming Vegan Food, From Milk to Meat appeared first on Green Queen.