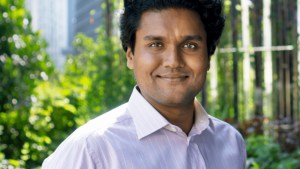 In an interview with Robbie Lockie for The Plant Based News Podcast, Vikas Garg shared how he left an impressive career at one of the world’s largest hedge funds to launch abillion – an online platform and app that helps people around the world live more sustainably.

“I was born into a vegetarian family. Along the way, I discovered my love and passion for animals, and that became a lifelong learning journey for me, and along that path, I became vegan.”

Born in Rajasthan, which is known for being majority-vegetarian, Vikas was raised meat-free from birth.

His family relocated to America when he was four years old, and dairy subsequently became a much more prominent part of his diet. The vegetarian lifestyle ignited a lifelong love for animals, but Vikas revealed that in 2008 he began to question everything.

A family illness prompted him to start questioning his food choices, and an overwhelming love for his dog further deepened his connection to the suffering of animals.

Vikas also cites the documentary Earthlings as having an instrumental role in his life-changing decision to go vegan.

“I watched Earthlings for the first time, and it blew me away… Overnight it became really obvious that these ideas I had around dairy and leather were so misplaced.”

He describes watching the documentary as a defining moment in his life, and he now calls his decision to go vegan his “north star.”

Spirituality and urbanization in India

During the podcast, Vikas discusses the complex relationship between religion and animal welfare in India.

The cow is a sacred animal for many Hindus, who make up over 80 percent of India’s population. But Vikas notes that this doesn’t necessarily result in a good life for the animals.

“People in India tend to have a very romantic view of the cow, which doesn’t actaually show up in the treatment of the animal.”

He goes on to tell us how the vegan movement has ramped up in India in recent years, but that increasing urbanization is driving the demand for processed foods.

Much of the traditional Indian food eaten in the countryside is meat-free, so Vikas says focussing on increasing plant-based options in these urban areas is critical.

He now works with Humane Society International and other organizations to promote animal welfare in India.

Quits everything to focus on sustainability

In 2015 Vikas moved from the US to Singapore to pursue the next steps in his successful career in finance. After a couple of years, however, he began to rethink his path in the aftermath of the 2016 US presidential elections.

Vikas was blown away by the election of Donald Trump and primarily the incredible power of social media. Yes, the communication platforms we use every day can be used in terrible ways, but Vikas told us how he became excited about its potential to change the world for good.

As such, he started to feel like his professional life as an investment banker wasn’t reflecting his values.

He wanted to put his skills and expertise towards a pursuit that aligned better with his personal beliefs – a project that would do good and inspire social change.

He started to dream up ways of re-inventing social media, and the idea of “mindful scrolling” took hold of him. That’s how the idea for abillion was born, and at the start of 2017, he resigned from his job to embark on this journey.

Knowing nothing whatsoever about tech, Vikas rolled up his sleeves and joined a three-month coding boot camp, where he met his first collaborator Jonathan Ng, who would go on to become the technical product manager at the company.

First operating under the name abillionveg (soon to become simply abillion), the start-up was officially launched in May 2018.

Vikas’ overarching ambition is to inspire a billion people (hence the name abillion) to join the plant-based movement by 2030, as well as donate $1 billion to support animal welfare causes.

With his concept of “social media for a better planet,” his mission is to change the world one vegan dish or product at a time.

“We want to make it really easy for people around the world to discover vegan options and more sustainable options.”

The first post on the platform came from Singapore, and word of mouth played an important role in spreading the word about abillion and its mission.

Abillion aims to make it easier for people around the world to live sustainably with user-generated content in the form of reviews.

One of the problems that Vikas sought to address is that in the restaurant industry, most online reviews often fail to mention any vegan or vegetarian dishes as the majority of menu items cater to omnivores.

So abillion is designed to review dishes and products rather than restaurants, opening up a lot more options for the consumer.

Abillion serves as the voice of the consumer

Users post reviews of vegan options at their favorite restaurants or of vegan products they use, creating a direct feedback loop with those businesses and manufacturers.

This influences the way businesses interact with their customers by starting to provide more vegan options and ultimately leading to social change on a global scale.

“We need to be really focused on the people. How can we shift from that mindless scrolling to mindfulness? How do we make that experience valuable to them so they feel inspired by these choices they’re making.”

Vikas also shares that the majority of the people using the platform are actually neither vegan nor vegetarian:

“60% of the users of the platform are actually not vegan or vegetarian. They are meat-eaters who want to experience the lifestyle.”

Now, the platform has an ever-growing catalog of reviews from over 90 countries around the world and a rapidly growing user base, particularly in places like Singapore, the US, and the UK.

True to its underlying philosophy, the company uses the data gathered in a responsible manner to illustrate the market trends influenced directly by consumers, share industry insights, and advocate for sustainable choices that protect the planet.

They have launched a dedicated space where they share these insights to help other companies, entrepreneurs, and policymakers discover the impact of the plant-based movement and recognize the opportunities for social impact on a global scale.

Launching the app was only the beginning. Vikas continued to seek ways in which abillion could have an even more tangible and positive impact on the world.

In 2018, the team at abillion came up with an ingenious way to redirect the company’s marketing dollars.

They began contacting farm animal sanctuaries around the world and also developed a donation mechanism on the platform. That way, every time users choose to eat something vegan, they are rewarded with a donation credit they can send to one of the partner animal sanctuaries.

As Vikas shares, this feature is one of the things that is unique to the abillion platform.

“We felt very strongly that we didn’t want to spend money marketing on social media, and we wanted to really create a group and a tribe of people… That was just our way of connecting folks back with the impact.”

What’s next for abillion?

Another way in which abillion has been able to create impact is by branching out from restaurant and dish reviews into featuring consumer products and packaged food.

For example, users can discover more about the over 15 000 options of plant-based meat alternatives from all over the world. Since its inception, abillion has grown to include reviews of all kinds of vegan products, including sustainable fashion, cosmetics, and more.

Vikas hopes to inspire and empower other entrepreneurs who want to create businesses, launch products, and help the movement. With a focus on vegan products and sustainability, in the first half of 2022, abillion will pilot the idea in a single market before working on expanding globally.

“What I really want to do is build a platform that helps the next 1000 or 10000 entrepreneurs get their foot in this space. We’re creating the first ev

This will be a big step-change for abillion connecting the users of the platform in a completely novel way and allowing anyone to buy or sell their vegan products on the app.

“There are all of these people coming up with creative solutions… I’m a die-hard optimist and a realist, and it’s exciting how more and more people around the world are taking action.”

You can listen to the conversation in full on The PBN Podcast here.

The post Vikas Garg Aims To Inspire A Billion People To Go Vegan With Abillion App appeared first on Plant Based News.