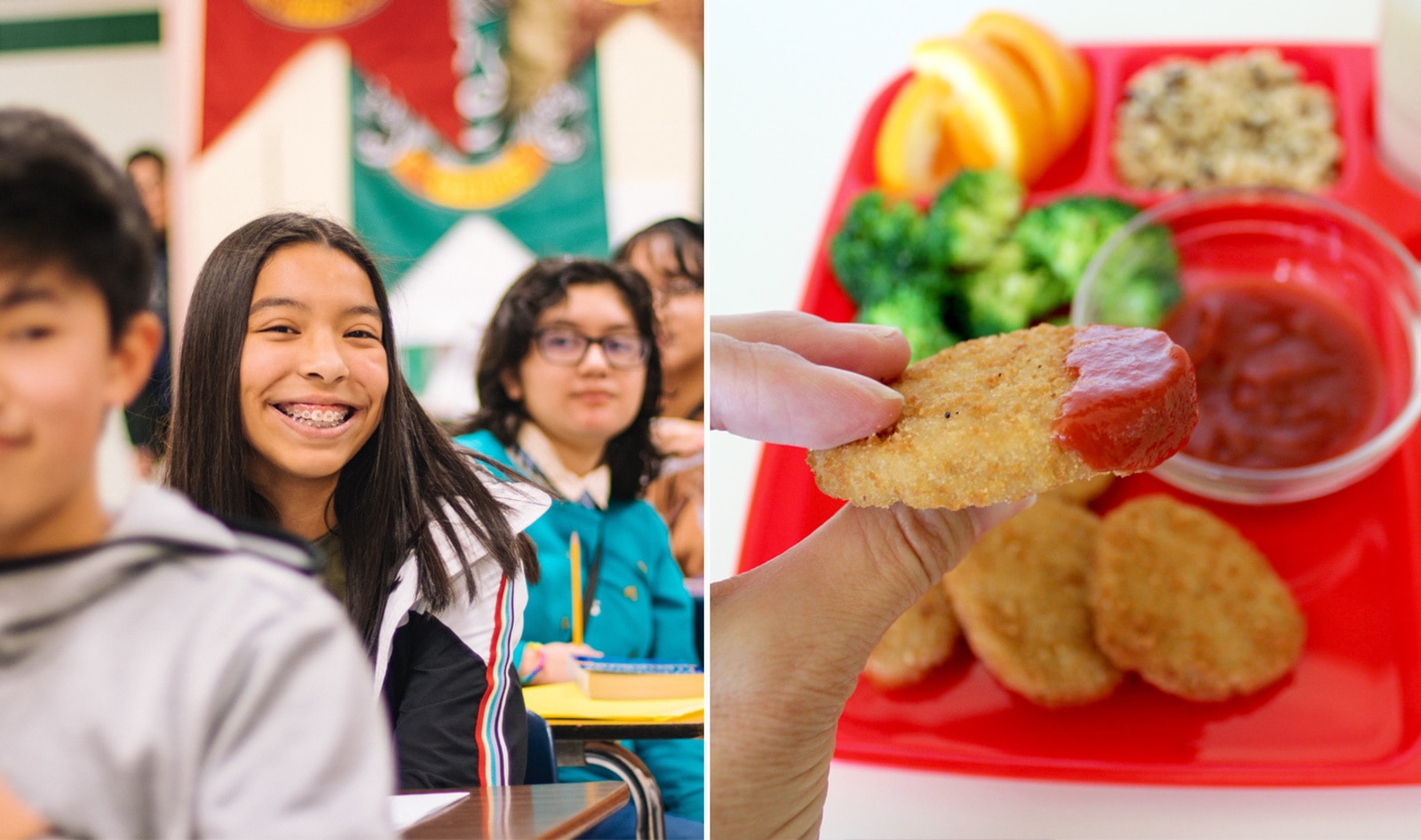 This school year, vegan chicken nuggets will be on the menu at six school districts in California and Washington—which collectively serve roughly 125,000 students. The new Kickin’ Nuggets are vegan chicken nuggets made by Rebellyous Foods, a Seattle-based startup founded by Christie Lagally, the former senior scientist at food-advocacy firm The Good Food Institute. The vegan startup’s aim is to develop affordable plant-based products for the food-service sector and focusing on schools and hospitals to make the greatest impact.

Made from textured wheat, chicken-less flavoring, cornstarch, oil, and corn breading, the Kickin’ Nuggets qualify for two meat alternate credits under the National School Lunch Program (NSLP) and are nutritionally superior to their animal-derived counterparts as they are lower in both sodium and saturated fat and contain no cholesterol, hormones, or antibiotics. “As school districts across the nation face supply chain shortages, we are proud to be able to offer students nutritious, delicious, plant-based nuggets,” Lagally said. “Making plant-based foods available to everyone, especially schoolchildren, is a critical part of our mission at Rebellyous Foods.”

“Schools play a pivotal role in shaping children’s dietary patterns, so we are thrilled to be able to offer Rebellyous Kickin’ Nuggets to help acquaint our diners with delicious plant-based options while teaching the importance of eating a wider variety of foods,” Frank Castro, Director of Child Nutrition Services at Dublin Unified School District, said.

Every year, schools serve approximately 5 billion lunches and 2.4 billion breakfasts to children, many of which include a variety of animal products. While animal-based nuggets are still the norm at schools, plant-based companies are looking to create more climate-friendly menus for kids—who want to fight climate change but may not necessarily understand the environmental impact of animal agriculture.

Last spring, plant-based startup Impossible Foods identified a knowledge gap based on a survey of 1,200 children between the ages of five and 18. Impossible Foods found that 80 percent of the children surveyed were aware about climate change and that awareness increased with age. Nine out of 10 children responded that it was important for them to take action against climate change and 73 percent of children felt as if they had the power to do something to either slow or stop it. However, the children incorrectly ranked meat and dairy production as the smallest contributor to climate change and the vast majority of children (99 percent) reported that they consumed animal meat once per month with 97 percent reporting they consume it once per week.

To remedy this, plant-based startup Impossible Foods obtained a Child Nutrition (CN) label from the USDA approving its Impossible Burger to be served for lunch and breakfast at K-12 schools nationwide. This month, Impossible Foods launched its first vegan chicken product, Impossible Chicken Nuggets, at 150 restaurants with the goal of distributing them at 10,000 grocery stores by the end of the year. Impossible Foods also aims to get its vegan chicken nuggets on school menus to give kids a familiar but animal-free choice to bridge the gap.

Getting plant-based meals into schools

On the other side of the country in New York City, Meatless Monday is observed by all 1,700 NYC public schools thanks to an initiative pushed through by Brooklyn Borough President, and vegan mayoral candidate, Eric L. Adams. Students are now treated to a meatless menu every Monday with a selection of vegan options. In 2019, NYC Council adopted Resolution 238, another initiative spearheaded by Adams, that calls upon the Department of Education to remove processed meat such as bologna, pepperoni, and hot dogs from public school menus citywide. This resolution is similar to a processed meat ban passed by California’s Santa Barbara Unified School District (SBUSD) in 2018. “There’s no room for carcinogens on the lunch line,” SBUSD Food Service Director Nancy Weiss said about the ban.