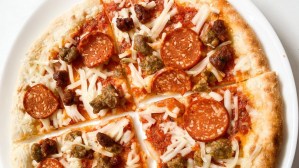 And, according to Trader Joe’s Goes Vegan, it’s ‘absolutely delicious’. The vegan blogger added on Instagram: “The chewiness of the crust makes it hard to believe it’s a freezer pizza…

“The cheese didn’t appear to get all melty, but when your bite into it it has that gooey flavor…I highly recommend trying this pizza. It’s seriously incredible!”

First employee and close friend Leroy Watson said: “At a time in American history when frozen dinners and processed foods were the trusted staples, Joe saw the opportunity to create a different type of grocery store for the ‘over-educated and underpaid’ consumer, the burgeoning middle class.”

The grocery chain now has a variety of vegan products. This includes Impossible Foods’ Impossible Burger – in a bid to bring more plant-based options to the masses.

Also among them is Trader Joe’s Vegan Ranch Crunch Salad Kit – featuring a variety of lettuce and ranch dressing.

The chain also offers a range of on-the-go snacks from a Vegan Tzatsizi Dip, to pea and chickpea-based Crisp Crunchy Crisps.

You can find out more about Trader Joe’s here