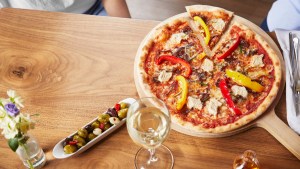 Announced today, the partnership will see the Italian pizza brand serve THIS Isn’t Chicken products on some of its most popular dishes. This marks the first time Prezzo has ever used plant-based meat across its restaurants nationwide.

Prezzo will feature THIS Isn’t Chicken as a meat alternative on both its Chicken Penne Arrabbiata and Chicken & Roasted Peppers Pizza. As both companies believe no one should have to compromise on taste or texture, the collaboration is designed to appeal to meat-eaters. Moreover, THIS caught Prezzo’s attention for its ability to mimic the real thing. Customers will be able to taste the new additions across all of Prezzo’s 150 outlets up and down the country from today, Monday 24 May. To add THIS Isn’t Chicken to dishes, customers will pay an extra £2.00. Moreover, prices of the dishes varies, due a tiering system across the UK. However, the pizza starts at £11 and the Penne Arrabbiata starts at £8.75 – meaning it’ll be available with vegan chicken for £10.75.

The launch comes after Prezzo witnessed a staggering surge in demand for plant-based meals – of more than 100 percent over the past two years. Additionally, plant-based dishes now make up seven percent of orders at Prezzo. This indicates a shift in consumer habits towards meatless meals. The partnership is a ‘giant step’ into the mainstream restaurant market, according to THIS. And, it comes after the pioneer secured spots on the shelves of four of the UK’s best-known supermarkets. Over the past 18 months, the brand has built a devoted fan base through its mission to create plant-based foods for meat-lovers.

Andy Shovel is Co-Founder of THIS. In a statement sent to PBN, he said: “Pete (Co-Founder) and I started THIS with the dream to make meat alternatives accessible to everyone. “Pizza is a mainstay of a Brit’s diet. And, collaborating with one of the UK’s leading Italian eateries is a pretty massive moment for us. “The dishes taste lush. And, I’m fairly sure meat-eaters will struggle to taste the difference between THIS Isn’t Chicken and the real thing.”

Moreover, Prezzo’s Marketing and Communication Director, Jay James, said the company is ‘really happy and proud’ to be serving THIS lsn’t Chicken. James added: “We are excited to partner with THIS and to welcome back the customers we have missed so much. “We now have even more choice for our vegan and veggies customers as well as those choosing to eat less meat… “Our teams are ready with the biggest smiles and the warmest of welcomes. At last, it’s time for pasta, pizza, vino.” You can visit THIS’s website here, and find THIS on Instagram here. You can also find out the menu options at a respective Prezzo restaurant near you here *This is a paid-for advertorial The post THIS Partners Prezzo To Bring Plant-Based Meat Toppings To The Masses appeared first on Plant Based News. meat chicken plant-based plant based