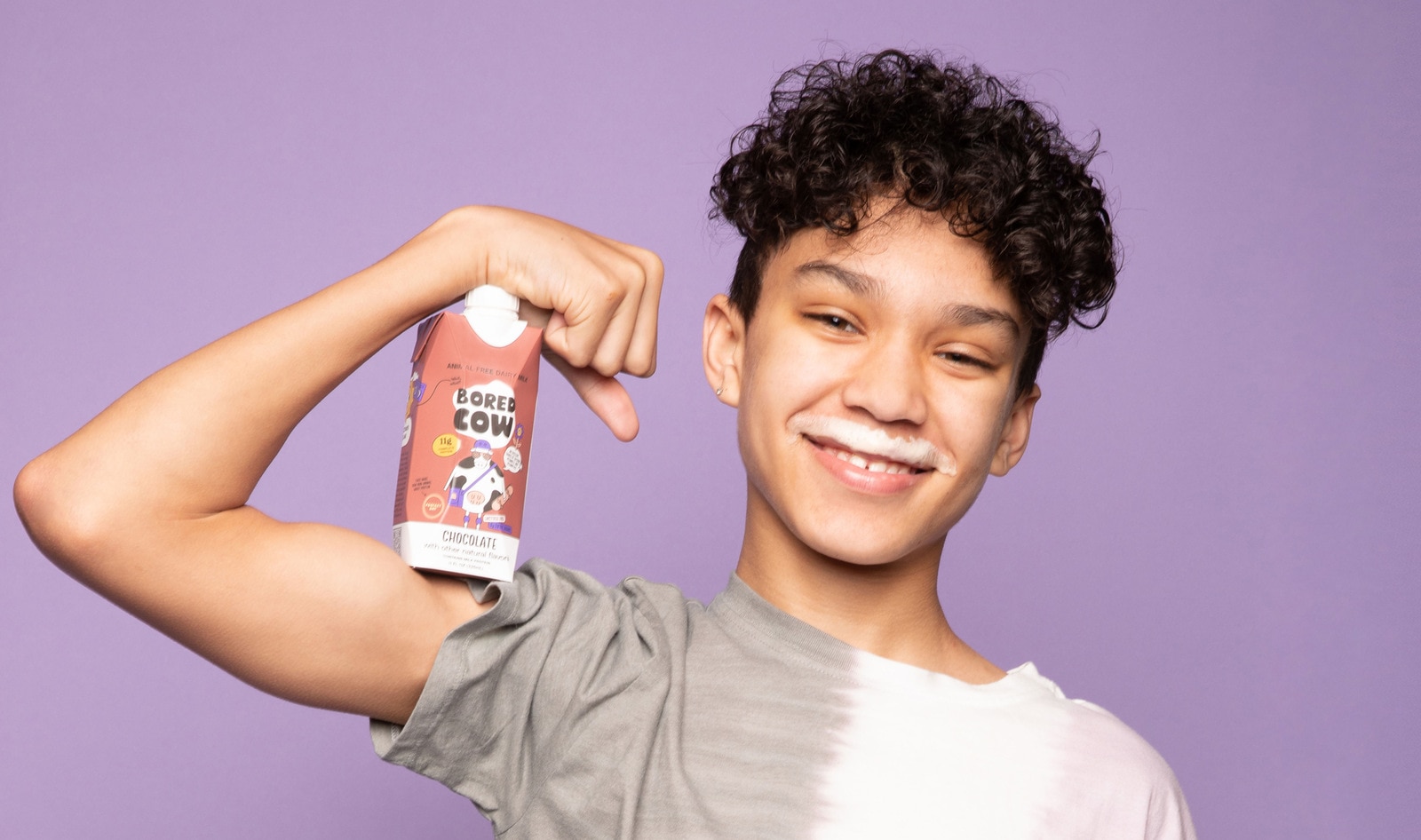 The technology here starts with Perfect Day’s animal-free whey that it creates through the power of microbial fermentation. Tomorrow Farms overlays its own plant-based ingredients into the formulation to impart both vitamins, minerals, and flavor to mimic dairy without exploiting cows. The resulting milk features 8 grams of protein per cup—the equivalent found in the same amount of whole milk—and carries a 97-percent lighter carbon footprint than its animal-derived counterpart.

Tomorrow Farms is releasing chocolate, vanilla, and strawberry milk under its new Bored Cow brand with a fourth flavor planned for this summer. The new Bored Cow milk line will be available for ordering and shipping direct to consumers from Tomorrow Farms’ website starting in early June.

“We started Tomorrow Farms with a belief that there’s a better way to make our favorite foods,” Tomorrow Farms CEO Ben Berman said in a statement. “That’s why we’re so happy to be partnering with Perfect Day to bring animal-free dairy milk right to consumers in their homes. We believe the Bored Cow brand will be synonymous with this exciting new category, offering an alternative to cow’s milk and plant-based milks that doesn’t compromise on taste, nutrition, texture, and, most importantly, the future of our planet.”

Tomorrow Farms is launching its first product line after closing a $10.5 million funding round this month. In addition to milk, the company plans to reimagine other refrigerator staples using this innovative technology.

Bored Cow is the latest to use Perfect Day’s animal-free whey technology to build a better dairy brand. Earlier this year, Betterland Foods also unveiled its first milk line—in Whole and Extra Creamy varieties—made with help from Perfect Day. With the mission of building a modern dairy brand, Betterland was created by entrepreneur Lizanne Falsetto, who previously founded nutrition company Think! (formerly thinkThin), which she operated for two decades before selling it to Irish corporation Glanbia for $217 million in 2015.

Food industry giant General Mills recently got in on the action, too, with the launch of Good Cultr, a dairy-identical cheese brand made with Perfect Day’s animal-free whey. The company’s first products are cream cheese but slices and shreds are planned, as well. Tomorrow Farms

The latest brand launch from Tomorrow Farms helps expand Perfect Day’s reach and ultimately contributes to achieving its goal of creating a modern dairy industry that no longer relies on cows or other animals for their lacteal secretions.

“These new flavored milks from the visionary team at Tomorrow Farms extend our impact to consumers looking for a fun, planet positive, and nutritious choice for their families,” Ryan Pandya, Perfect Day co-founder and CEO, said in a statement. “This engaging brand makes the kinder, greener option exciting for the generations who are growing up into the future we are creating.”

Perfect Day also operates multiple brands under its consumer goods arm The Urgent Company (TUC), including Brave Robot (which currently has ice cream and cake mix in its product portfolio) and cheese brand Modern Kitchen. TUC also made its first acquisition last year with CoolHaus, an ice cream brand that it is transforming with its dairy-identical proteins.

The plant-based dairy industry started with what some call “single-origin” products such as soy, almond, cashew, and coconut milk, along with yogurt, cheese, and ice cream made from these bases. However, in recent years, new developments have led to next-generation dairy products that replace cows with innovative technologies.

At $750 million in investment capital with backing from Leonardo DiCaprio and other A-listers, Perfect Day is the most well-funded startup in the microbial fermentation space. Down in South America, Chilean startup The NotCompany (“NotCo”) is also attracting big investors (such as world champion race car driver Lewis Hamilton) and capital to fund its own tech-forward approach to disrupting the global food system.

While Perfect Day relies on microbial fermentation, NotCo uses artificial intelligence to recreate animal products on a molecular level with ingredients drawn from a database of 300,000 edible plants. As such, its NotMilk and NotMeat are made with unexpected ingredients—such as pineapple, cabbage, and bamboo—that contribute specific flavor components found in their animal counterparts.

NotCo has found widespread success in South America, it is now setting its sights on the United States. This week, it announced a partnership with fast-food chain Shake Shack which is currently testing its first dairy-free chocolate milkshakes and frozen custards made with NotCo’s technology at select locations in New York and South Florida.

For more about dairy-identical technologies, read:
Vegan Ice Cream Just Got Better With These “Dairy-Like” Sundaes
Startup Raises $120M to “Liberate Food Chain From Dependency on Animals”
This Scientist Is Developing the Perfect Milk for Vegan Cheesemaking