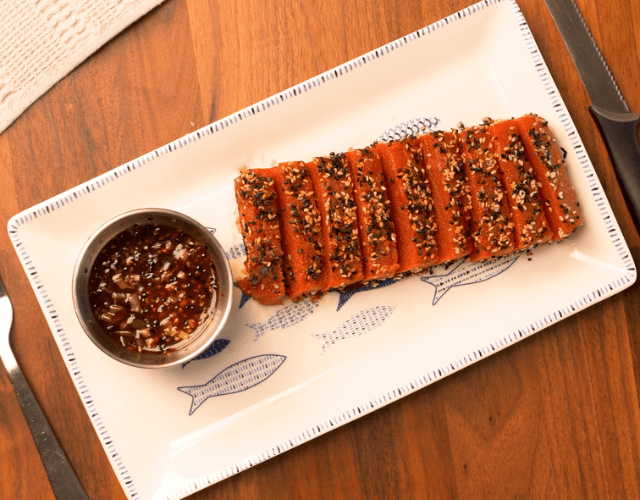 This is a sponsored recipe *[what is this?]

Fish has long been hailed as a health food. It’s often recommended in place of red meat (which comes with a host of health concerns), and is praised for its protein, iron, and essential omega-3 fatty acids.

But a growing bank of research is shining a light on the risks that come with eating seafood. Mercury, for example – a poison linked to neurological damage – is a chief concern. A 2013 study found that 84 percent of fish contains unsafe levels of mercury.

In a similar vein, separate research (a literature review published in 2020) concluded that 60 percent of the world’s fish contain microplastics.

So is fish actually good for you? And do we need to ditch it altogether?

Two years of research and development led the small but determined team at Current Foods to something special: delicious, sustainable, and free from the risks tied to fish consumption, Current’s Vegan Tuna Filets are (almost) too good to be true.

The plant-based fish – delicately crafted from algae, radish, bamboo, and potato – is free from mercury, microplastics, gluten, artificial colors and flavors, and parasites (another concerning side effect of fish farming). It’s safe for people who are pregnant, and is enriched with omega-3s, iron, and B12.

Those in the US can purchase Current’s Vegan Tuna Filets online. In Spain, it’s available at La Sirena and in Italy, you can find it at Poke House.

Intrigued? Try it for yourself with the vegan grilled tuna steak recipe below.

You can find out more about Current Foods on Instagram, and get its vegan Tuna Filets here.

Hungry for more? Check out this vegan sushi burrito recipe, or these spicy tuna and avocado sushi sliders. And dig in!

* This is paid-for content; funds from this article help Plant Based News continue to provide millions of people around the world with free content they know and love. We only work with brands we support and use ourselves.

The post This Grilled Vegan Tuna Steak Recipe (With Asian Sesame Crusts) Is The Ultimate Crowdpleaser appeared first on Plant Based News.