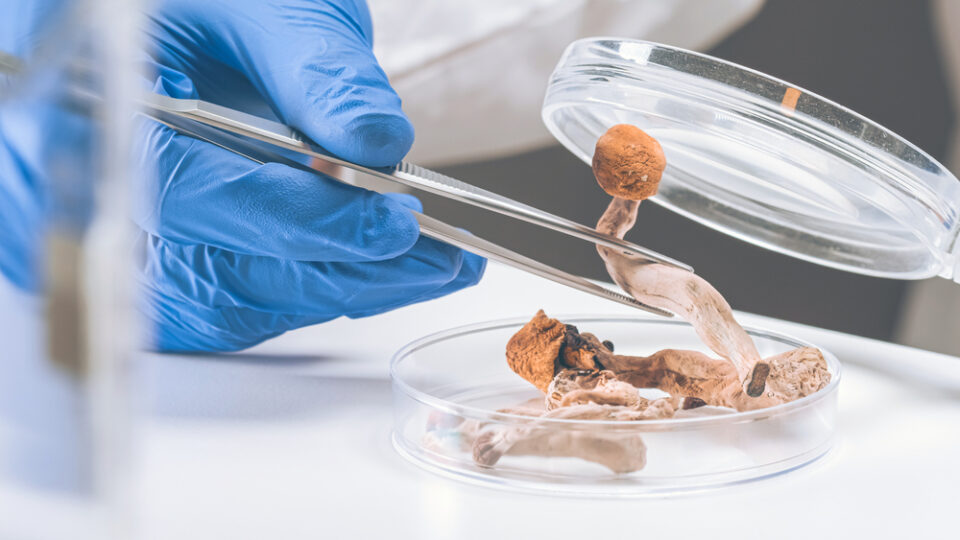 There has been a proliferation of hemp-infused and cannabis-infused products of all kinds, including beers. Most use low or no THC versions of CBD. Many products, like Ceria Brewing beer, use different dose levels of THC infused in their beer that the consumer can choose (but no alcohol).

But as psilocybin continues to drift from simply decriminalized into the edges of recreational legality, with people casually micro-dosing in their coffee every morning, the same CBD product expansion thinking is hovering over whether to infuse alcohol with psilocybin as a sort of double whammy trippy buzz drink.

Could a carefully measured microdose of psilocybin infused in an alcoholic drink become a consumer favorite? Should a microdose of psilocybin in any liquid—water, fruit juice, etc.—stay as just another one of the plant-based non-alcoholic drinks that are growing in popularity? Or should everybody just cool it on consuming recreational psychedelic mushrooms infused into anything, and stay with the non-psychedelic mushrooms?

It’s quite a conundrum for the functional food creators because there are literally dozens of studies out there about the dangers of mixing alcohol with psilocybin. For example, one alcohol rehab guide calls it “highly dangerous.”

The American Addiction Center (AAC) states that, while there might not be any inherently adverse interactions from mixing psilocybin and alcohol, there still are many unknowns involved. “One study found using mushrooms could mask some of the effects of alcohol,” the AAC reported. “Since the effects of one drug can cover up the effects of the other, it could lead to increased consumption of both.”

Ironically, there is some deliberation about psilocybin actually treating alcohol addiction.

Then there is the intriguing viral story about certain South American ancients getting trippily buzzed on a psychedelic beer. The story goes that between 500 and 1100 C.E., in the highlands of Peru an empire called the Wari, who lived there before the Inca, used to mix a strong natural hallucinogen, the vilca seed, with the fermented fruit of a certain tree, for boozy, trippy special event parties. It’s the kind of story that party hearty types like to hear. Why not psilocybin in my beer just like those ancient dudes did?

The exploration of non-psychedelic mushroom-infused teas, drinks, and soups has been heating up recently. They do not make the drinker hallucinate but just give the consumer a dose of one of mushroom’s super powers: immunity balance, stamina, stress and anxiety relief, and skin enhancement.

So is the anything-infused-into-alcohol movement slowing down, and is psilocybin late to the party? Could be. Consumers today are turning away from alcoholic drinks, as put forward in a book by journalist Ruby Warrington, “Sober Curious: The Blissful Sleep, Greater Focus, Limitless Presence, and Deep Connection Awaiting Us All on the Other Side of Alcohol.”

And consumers seem to want more of what non-psychedelic mushrooms have to offer.

Yield Growth Corporation (OTC: BOSQF), a phytoceutical and consumer packaged goods company, is an example of one company that is all-in for mushroom-infused drinks. They just completed the initial development of a formula for a new line of mushroom-infused coffee mixes through their wholly-owned subsidiary, Flourish Mushroom Labs Inc. Flourish Mushroom Labs intends to commercialize the formulas, going to market first with mushroom-based soups and coffees.

The mushroom coffees will be infused with various wild mushrooms such as Lion’s Mane, Turkey Tail, Reishi, Shitake, Chagas, and Cordyceps.

Califa Farms, makers of plant-free dairy products, is developing a host of mushroom beverages, such as Curious Elixirs, Earth and Star, Four Sigmatic, FreshCap, Health-Ade, Rebbl, Rowdy Mermaid and Woke Up energy shot, with many more to come.

“There’s so much going on right now. It’s a functional beverage gold rush,” said Duane Stanford, editor of Beverage Digest as reported in a marketing and information publication, The Drum. “What got mushrooms quickly moving up the chain is the fact they get around a lot of the hurdles you see with CBD. They don’t have the same regulatory overhang. Mushrooms are generally recognized as safe under FDA guidelines. As long as you aren’t saying it’s going to cure cancer, you can make claims like, ‘It assists with anxiety and reduces inflammation.’”

While it appears that the legalized recreational psychedelic mushroom product is still working through the regulatory system in the U.S., and there are a huge amount of psilocybin edibles available online under dubious legal structures, there has been a glimmer of the coming psilocybin-infused product push here.

One company that is working on infusing psilocybin into its coffee is Denver-based Sträva, exploring the benefits and risks of combining micro-doses of psilocybin with their specialty coffee and tea products.

Sträva CEO, Andrew Aamot, said that the company’s vision is to bring consumers “amazing beverages infused with promising natural compounds,” and, in the case of psilocybin, to “seek physical, mental and spiritual therapeutic benefits without triggering psychedelic ‘trips.’

In a press release, Aamot said that just as cannabis has been misunderstood and controversial for decades, psilocybin from mushrooms has been equally polarizing. “Yet proponents of both suggest they each can contribute meaningfully to the human experience. As research is proving, with measured consumption, cannabis and psilocybin can both promote physiological, mental and spiritual health.”

Los Angeles-based Cannabis Global, Inc. (OTC: CBGL) announced in October 2021, that it has launched a new research initiative to develop methods to infuse food and beverage with psychedelic compounds, such as psilocybin, psilocin, baeocystin, norbaeocystin, aeruginascin, among others.

So as psilocybin decriminalizing turns into legalizing recreational use, still not a sure thing in this country yet, chances are good that there will be a psilocybin-infused alcoholic craft drink of some sort. The Wari Peruvian Porter? The Psilo-Tripel? The Psychedelic Saison? For now, consumers who want to try the trippy boozy buzz that the ancients reveled in are stuck making up their own magical, mystery concoctions.

The post The Psilocybin-Infused Product Wave Is Standing By appeared first on Green Market Report.