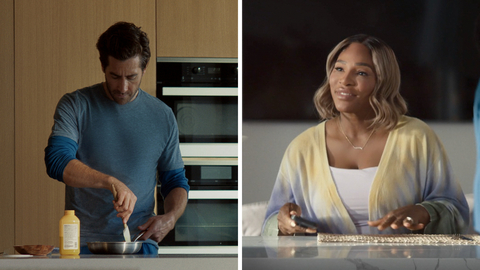 Tennis star, Serena Williams and actor, Jake Gyllenhaal have agreed to invest in and work with Eat Just on its “Really Good Eggs” campaign.  The celebrity pair will star in adverts that highlight their healthy lifestyles and that joke around with the idea of the elaborate lengths people think celebrities go to keep fit and healthy. For example, Gyllenhaal’s advert shows him cooking some JUST Egg following his secret workout that only celebrities know about.  Whilst Williams’ advert is based at home where she is pandered to by an array of nutritionists and trainers who are employed to ensure every moment of her day is healthy.

The ads also include actor, JB Smoove, who takes on the role of narrator.

The Really Good Eggs campaign aims to show how introducing a healthier diet can be achieved by simply replacing a single product with something more sustainable.

Each advert acts as a parody of the traditional assumption about some of the wilder health tactics taken on by celebrities. But always with the underlying stance that everyone can eat healthier with JUST Egg’s plant-based egg alternative.

We’ve all heard about the supposed funny diets and extensive personal trainer sessions, right?! Well, we love how they are being used in a way that will benefit plant-based living.

And so it seems, are the stars…

“I’m excited to be partnering with JUST Egg,” Gyllenhaal said. “I’m eating more plant-based for my health, and JUST Egg makes it easy and delicious. I also recognise the impact our food system has on our planet, so JUST Egg’s mission is important to me. And, honestly, who can turn down being narrated by JB Smoove?”

We will also learn about the health benefits of JUST Egg during the advertising campaign. It’s a cholesterol-free egg alternative that contains 69% less saturated fat than chicken eggs. They also contain five to seven more grams of protein per serving.

What’s also important to note is the sustainability of JUST Egg. Eat Just announced that having sold the equivalent of 250 million eggs, they’ve saved the equivalent of 9.1bn gallons of water and freed 13,466 acres of land. We are excited to hear future updates from the company.

We are loving the amount of plant-based egg alternatives that have been recently hitting the market. Remember Hodo launching its All Day Scramble? We’d love to hear if you’ve tried it.

The post Serena Williams and Jake Gyllenhaal invest in some Really Good Eggs! appeared first on The Vegan Review.