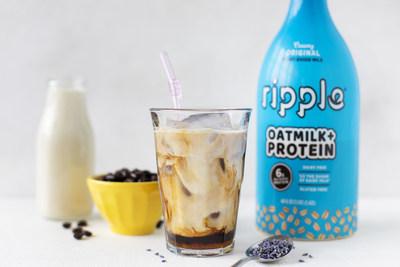 Plant-based dairy product wonders, Ripple Foods, has added to its product list with its latest plant-based milk, Oatmilk Plus Protein.

Oatmilk Plus Protein contains 6 grams of protein per serving which equates to roughly three times the amount found in regular oat milk. In addition, it contains 50% less sugar and 50% more calcium than dairy milk.

Ripple Foods Oatmilk Plus Protein can be found in various stores such as Whole Foods Market and Jewel; it will soon also be available at Target and Sprouts and retails for $5.99 a bottle.

Ripple Foods’ plant-based milks are made using gluten-free oats as well as pea protein. Amongst their product range, Ripples makes a delicious plant-based Kid’s Milk, various flavoured Protein Shakes plus divine Chocolate Milk. The Kid’s Milk is created with the addition of DHA Omega-3s, choline, and prebiotic fibre. It also contains essential vitamins and minerals, such as calcium, magnesium, riboflavin, and vitamins A, D, and B12. Perfect for a growing individual.

“There are many consumers who like the taste and texture of oat milk, but the reality is they are disappointed in the nutritional profile, specifically the lack of protein,” said Laura Flanagan, Ripple Foods CEO. “Ripple is changing the game so that those who like oat milk, can now really love it, as Ripple’s version of oat milk provides three times more protein than regular oat milk, along with the great taste and creamy texture people expect. We’ve brought the power of protein to oat milk, to take it to the next level – this is how Ripple does oat milk.”

To further support the plant-based dairy market, Ripple launched a new marketing campaign in April called “Moove Over to Ripple.” This contained a new TV spot, digital and social media content as well as live events to try and encourage people to consider swapping their dairy milk for a Ripples plant-based alternative.