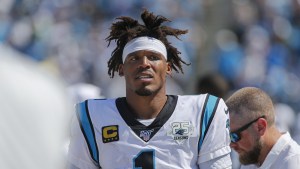 In a recent interview, the quarterback explained how he wants to help expand the plant-based food scene to his hometown community in Atlanta, US.

Newton has been vegan for several years after witnessing a “remarkable change” in his body. He became interested in Daring Foods when he met founder and CEO Ross Mackay in 2019.

“I believed in him and his vision as a person and was all in,” Newton told Fortune this week.

He adds that he is looking to build a legacy so that when he tires from his sporting career he can continue to learn and “make an impact.”

More pertinently, Newton’s desire to elevate plant-based foods is anchored to his identity as a person of color.

He explains: “Being a Black man who grew up in the South, fried chicken was a staple in most diets. It was inexpensive and delicious; while not the healthiest option, we sometimes even had it twice a day.

“…Something I hope to accomplish with Daring is to teach the Atlanta community and others the power of plant-based eating.

“Forming a healthy diet doesn’t need to be expensive and can have the same taste, texture, and feel as real chicken without the harmful results to our body, environment, and the chickens.”

The NFL star joins the likes of decorated rapper Drake and Olympian Miles Chamley-Watson in backing the company.

Drake’s investment helped the brand climb to a $40 million Series B funding round last year. Now, it’s garnered over $120 million in total.

For Watson, the backing was also motivated about making vegan food more accessible.

The athlete revealed he and Daring Foods share “the exact same mindset and morals.” And, that they both want to make significant societal change.