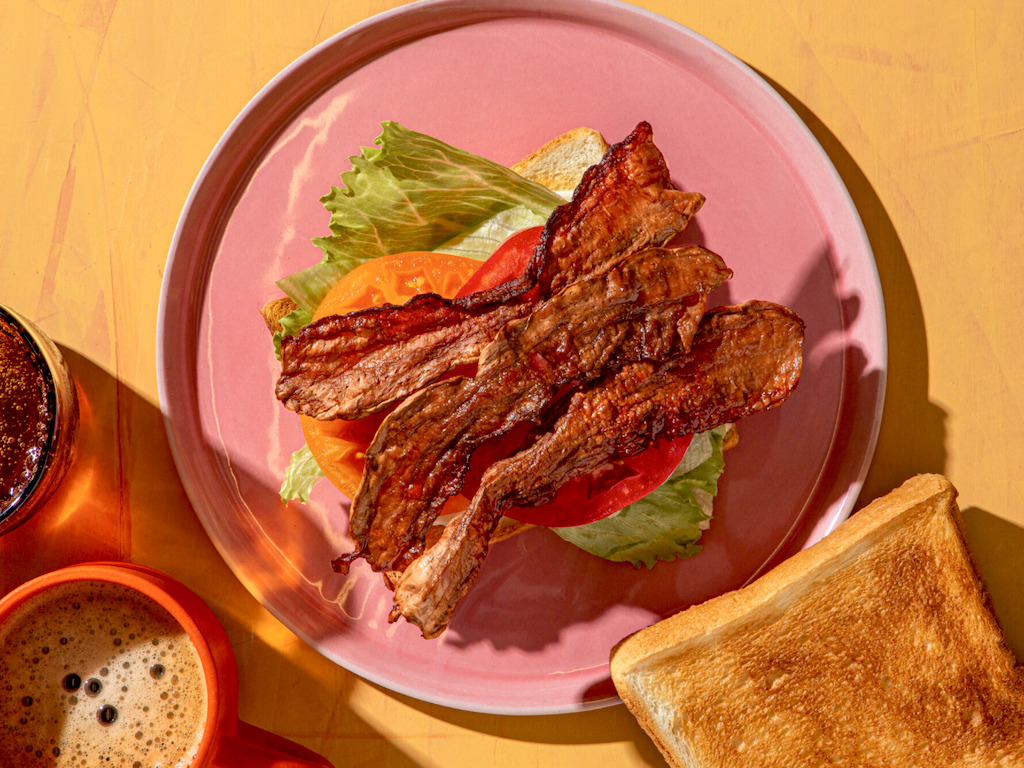 When it comes to the foods that plant-based folk miss, bacon never fails to make it on the list. Let’s face it: who doesn’t love bacon? From topping maple syrup-covered pancakes, to making the perfect breakfast fry-up and simply being the irreplaceable B in the classic B.L.T. sandwich, it’s pretty much a consensus that we’re not going to be able to convince a meat-lover to ditch meat without innovating a delicious animal-free alternative that can truly rival bacon.

Enter the below food tech innovators, who are tapping different technologies to develop mind-blowingly real pork-free bacon (in some cases, literally real on a molecular level), to make sure that all of us can sustainably and ethically enjoy everything bacon from rashers and seasonings. Let’s take a look.

London-based food tech THIS, founded by self-professed meat-lovers Andy Shovel and Pete Sharman who left their jobs at a burger chain, uses soy and pea protein to make its vegan bacon rashers. Dubbed THIS Isn’t Bacon, the ready-to-cook high-protein alternative, which is fortified with vitamin B12 and iron, is already selling across 2,000 outlets in the U.K., including major retailers like Tesco and Waitrose. With its strong fanbase, the startup recently smashed crowdfunding records, bagging US$5.2 million in just two days to continue expanding its crave-worthy range.

MyForest Foods via MyEats is making bacon “without the oink” using its super ingredient: mycelium. It’s the filament-like roots of mushrooms, which MyEats is using to create the 3D textures and structures that resemble whole cuts of meat. In total, the whole process from “spore to slab” takes mere days to grow. MyBacon, made from just six ingredients, is now available at Honest Weight Food Co-op in Albany, New York with more launches coming soon.

Paris-based 77 Foods, who debuted their technology at the Future Food-Tech Summit last year, is dedicated to creating animal-free alternatives for the foods that people love and crave the most. Of course, the first thing on their list was the fatty proteins like bacon and lardon – and that’s exactly what they’ve done, making a 100% plant-based analogue bearing the fatty streaks of the real deal, promising to be worthy of a proper B.L.T.

California’s Prime Roots is all about its super-protein koji, and to date, is the only startup using the ingredient to create its range of plant-based proteins and meaty-tasting ready meals. Founded by the daughter of a chef and restaurateur, Prime Roots grows koji with microscopic fibres identical to the real whole muscle cuts of meat, and it tastes exceptionally real too because of its natural umami qualities. Aside from its 100% vegan bacon retail package, consumers can also try the product in Prime Roots’ line of plant-based meals like its new (bacon-filled) ravioli.

Mission Barns is one of the few cell-based protein startups focused on culturing real fats directly from cells that have been isolated, placed in a warm cultivator feeding it the right nutrients to grow. It sounds a bit like science fiction, but they’ve really done it, debuting cell-based bacon last year in a taste test. The bacon itself is “hybrid”, meaning it contains cultivated pork fat with plant-based proteins, and according to the startup, the fat is really what gives that distinctive meaty, pork and rich sensory experience that people want.

Another cell-based startup culturing bacon is Higher Steaks, who revealed its prototype last year. Like Mission Barns, the food tech uses a hybrid approach to develop its bacon. It took around a month to culture, using induced pluripotent stem cells grown in a bioreactor, and then Mission Barns combined its cultivated animal muscle cells with around 30% of plant-based proteins and fats for the final product.

Swedish startup Raging Pig, who also showcased their innovation at the recent Future Food-Tech Summit, is all about solving the flavour of delicious bacon. They’ve come up with two products – 100% plant-based bacon bits and seasoning – using only natural flavourings and ingredients, and it’s soy-free, allergen-free and GMO-free too. So far, the shelf-stable product by Raging Pig has been huge hit with consumers, with its first batch already sold out.