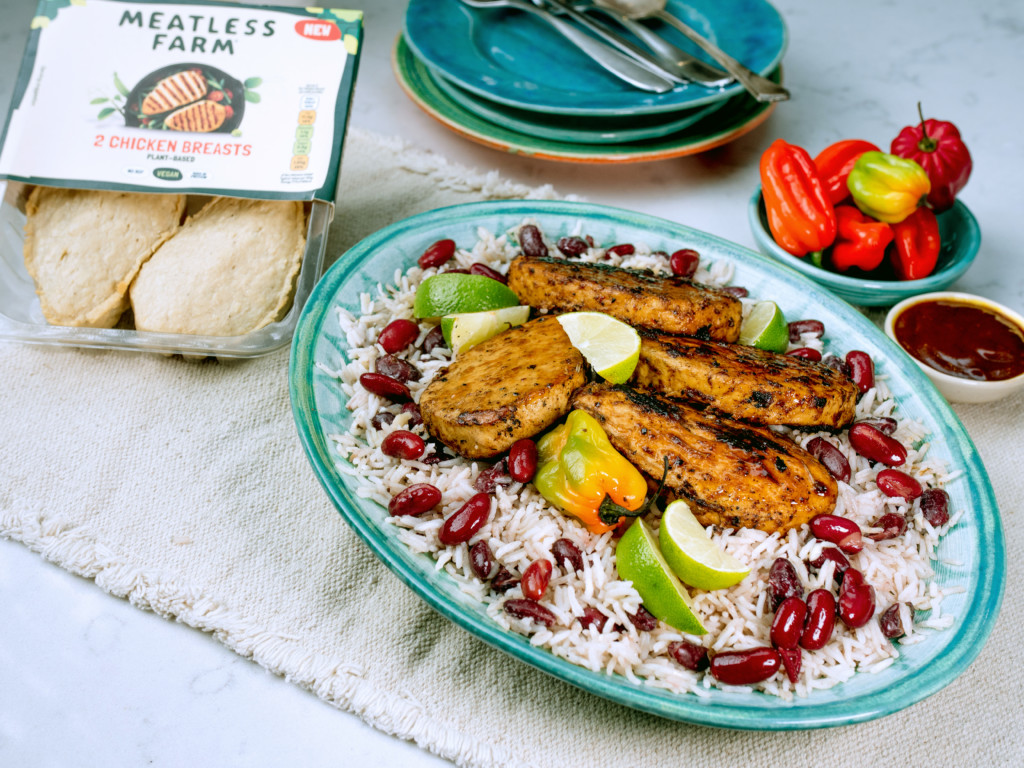 Visitors can try a plant-based take on a classic with the Meatless Jerk Chicken Rice-n-Peas or spice it up with Chunky Jerk Chicken-less Strips, available for free to eat in or takeaway, until stocks last.

The M***F*** Jerk Joint will allow visitors to make a small, tasty change that can make a big difference; Meatless Farm’s recent environmental data carried out by Joseph Poore (researcher at Oxford University) shows the UK can save 4.3 metric tonnes of CO2, equivalent to 13 million flights to Malaga, by swapping just one chicken meal a week to a plant-based alternative* – so tuck in!

Meatless Farm is also helping to turn meaty named people meatless as part of its ‘Anyone Can Change the World’ Veganuary campaign, and is inviting anyone with a meaty surname to get the VIP treatment. If you’re a Mr. or Miss Chicken, Ham, Bacon or Beef, you can attend an exclusive launch party before the restaurant opens to the public and meet Mr. Levi Roots himself by messaging @meatlessfarm with your meaty named ID!

Levi Roots, said: “I’ll be turning my all-time favourite classic dish of Jerk chicken, rice and peas plant-based with the help of Meatless Farm’s new chicken breast and my Reggae Reggae sauce, and there’ll be absolutely no compromise on taste with my delicious recipe.

“I’m excited to bring authentic Caribbean flavours to this classic dish plus a modern take on my jerk infused and meat free chunky chicken strips. It’s not to be missed!”

Morten Toft-Bech, Founder of Meatless Farm, said: “A small change of swapping one meat meal a week to plant-based can make a huge difference and we are helping people do that with the launch of the UK’s first plant-based jerk chicken restaurant with Levi Roots. His dishes will be a treat for everyone’s tastebuds this Veganuary.”

Safety is paramount at Meatless Farm so we are reviewing the current situation daily and following government guidance. If restrictions are increased, the event will be postponed, and we will inform you of the new date.

Meatless Farm was founded by Danish entrepreneur Morten Toft Bech in 2016 to help reduce the world’s dependency on intensively farmed meat. He and his family had struggled to find a meat replacement that the whole family enjoyed and that wasn’t expensive. In 2018, the company launched its original fresh mince in major supermarket Sainsbury’s and is now one of Europe’s fastest growing plant-based brands, available in over 20 countries with major retail and foodservice partners including Whole Foods, Nathan’s Famous, Pret A Manger, Leon and itsu. The company is on a quest to help regenerate our environment, reducing the world’s intensively farmed meat consumption by making accessible and nutritionally rich plant-based meat alternatives. On average its products use 90% less land and 70-80% less water than their meat counterparts and contribute to biodiversity. Its products are made in the UK and Netherlands.