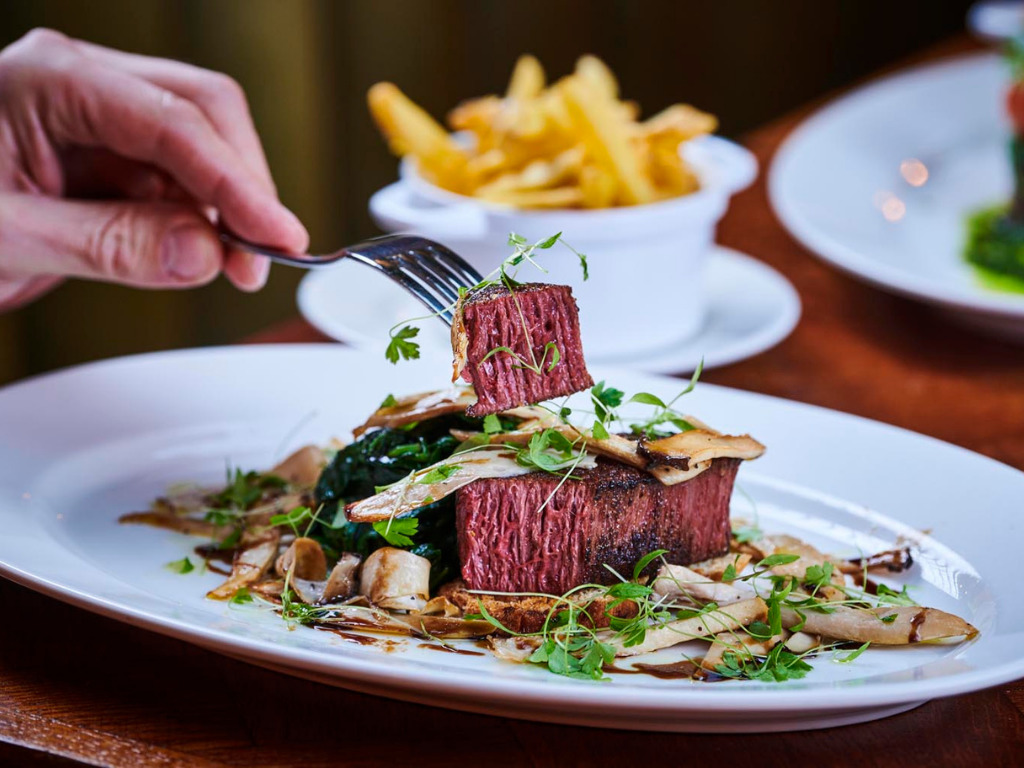 White himself is a staunch advocate of Redefine’s developments. At his flagship Leicester Square location, diners have been able to order Redefine steaks, burgers, macaroni cheese and pizza for months. 11 further locations will now be serving the alternative protein meat cuts.

Why is Marco Pierre White such a fan of Redefine Meat?

The famously outspoken and unapologetic chef surprised people when he first sang the praises of Redefine Meat. He famously called New-Meat the “cleverest product” he’d ever seen in his life, remarking that the structure would fool anyone into believing it to be real meat. He put his money where his opinion was and included the whole-cut flanks on his most prestigious menu, as Mr Whites in London.

“I was a vegan for nine months myself,” White remarked in previous interviews. “I didn’t feel satisfied. We didn’t have New-Meat in those days. I was always hungry…I eat this [New-Meat], once or twice a week. It’s really clever.”

Alternative protein has been heralded as a sector worthy of widespread support. As a potential way to alleviate climate change, by negating the demand for conventional meat, it is gaining traction. It is hoped that a shift towards plant-based meat will enable the elimination of deforestation by 2020, a goal set at COP26 last year. Animal agriculture has been confirmed as the number one cause of deforestation, in addition to being a significant emissions contributor.

Bringing consumers away from traditional protein sources remains the challenge, however. In a bid to tempt more consumers towards flexitarianism and meat-free eating, startups are looking to focus on whole-cut developments. Holy grails of steak, bacon, and chicken fillets are becoming more targeted than traditional analogues of minced or reconstituted meats.

Redefine Meat entered the alt-protein sector in earnest in 2020 with its debut steak. Last year it scooped $29 million in a Series A funding round. The investment was funnelled into the commercial launch of its 3D-printed vegan whole-cut meats, with “strong strategic partners” being sought. White, as a globally revered and respected chef fits that criteria.

“It’s an honour for us to be working with Marco and now, to be featured on his restaurants’ menus,” Eshchar ben-Shitrit, CEO and co-founder of Redefine Meat said in a statement. “From the very beginning, we’ve worked alongside chefs with meat expertise and butchers, as they always provide the best feedback for us to better our products.”

Replacing meat around the world

Alongside Redefine Meat, a number of whole-cut startups are putting their stamp on the alternative protein sector. From Slovenia’s Juicy Marbles, with its scarily realistic filet mignon to Colorado’s Meati, purveyor of mycelium superfood cutlets a wide spectrum of products are being released.

In a sign of how competitive the sector is becoming, Meati is embroiled in a legal battle with California’s The Better Meat Co. The former is claiming mycelium harvesting techniques were taken to its competitor by a former associate. In turn, Better has levelled an accusation of IP undermining at Meati.