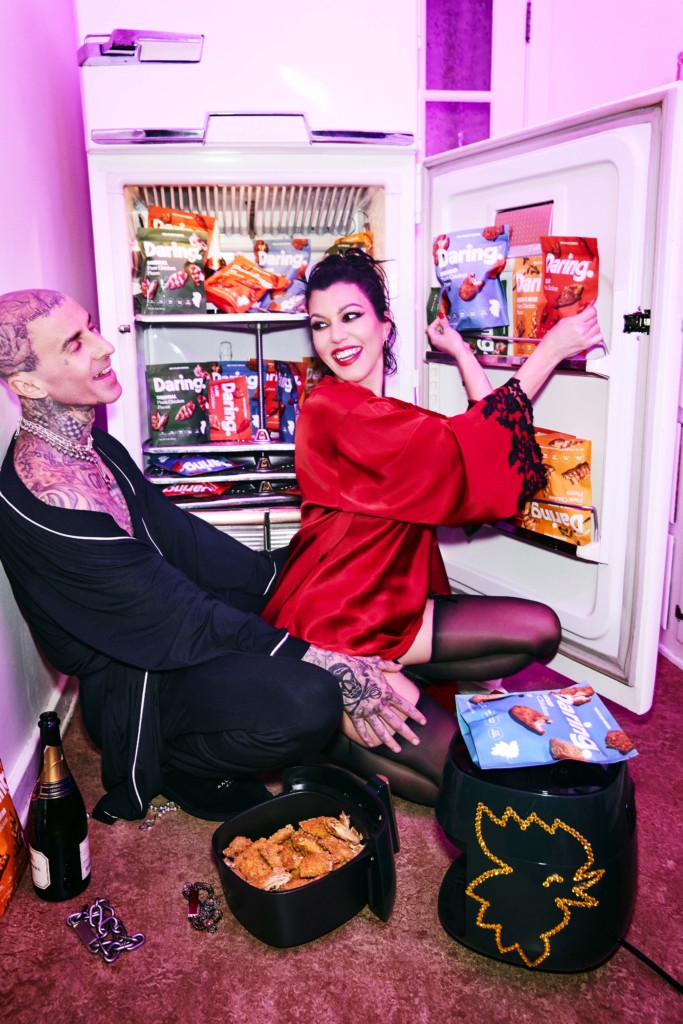 Daring spent a night with Kourtney and Travis at Chateau Marmont in West Hollywood two days after their Vegas elopement to capture their love for each other and for Plant Chicken. Daring developed four recipes for the couple to devour during their epic staycation to properly fuel up for the evening. The recipes will be available on Daring’s online cookbook, Unclucked Eats, and Kourtney and Travis will also share them on Instagram for fans to check out.

“From the moment our partnership with Kourtney and Travis began there was clear synergy between Daring’s mission and their personal beliefs on plant-based eating and the positive impact it has on the environment,” said Daring’s Founder and CEO Ross Mackay. “I could not be more proud to partner with them for Daring’s latest campaign and am grateful for their support and genuine love of our Plant Chicken.”

The campaign takes the consumers on a journey with the duo arriving in style with massive buckets of fried Daring Breaded Plant Chicken clutched in their hands as they exit their limo. From there, they can be seen getting “saucy” with each other, eating delicious meals in bed, and against a backdrop of Daring Plant Chicken spread throughout the Chateau Marmont penthouse suite, they playfully feed each other bites by hand while sipping on celebratory champagne.

The Daring campaign was shot by iconic fashion photographer Ellen Von Unwerth, who recently  shot their (third) wedding in Italy.

As proponents of plant-based diets, Kourtney and Travis were the perfect partners in this campaign to highlight just how enjoyable eating plant-based chicken can be. Kourtney’s health and wellness platform, Poosh, reflects her love of healthy eating with mindful ingredients, and Travis’ dedication to being vegan over the past years has influenced bringing more plant-based options to the restaurant industry. And, Monty’s Good Burger, the iconic vegan burger restaurant of which Travis is an investor, just launched Daring Plant Chicken Tenders at all locations.

“I’ve been on a health and wellness journey for the past 13 years, which has made me super conscious of what I put into my body and my kids’ bodies. I’m not fully vegan, but Travis has helped me keep to a mostly plant-based diet, which is so much easier with Daring,” said Kourtney Kardashian, Poosh Founder & TV Personality. “I honestly cannot believe how much it tastes like chicken. There are lots of plant proteins out there, but we’re always looking for options that are super clean with all-natural ingredients. That’s why I love Daring!”

“I haven’t eaten meat since I was 13 years old, so really good plant protein is important to me. Daring is awesome, because it’s super clean and has all-natural ingredients.” said Travis Barker, Musician. “When I went fully vegan 15 years ago, the options were basically straight vegetables, so I’m excited to see more plant-based choices on menus– That’s why I invested in Crossroads Kitchen and Monty’s and why this partnership with Daring felt so right for Kourt and Me.”

Daring is a uniquely textured and tasty 1:1 substitute for chicken, made through a clean and simple flavor infusion process, with almost 50% less ingredients than market competitors. Daring’s vegan, gluten-free, and non-gmo plant chicken pieces come in four audacious flavors including Original, Breaded, Cajun, and Lemon & Herb with an MSRP of $7.50 for an eight ounce bag. Available at over 400 restaurants and 9,000 retailers across the country, including Sprouts, Erewhon, Whole Foods, Walmart, Kroger and most recently Target – Daring is available from coast to coast. The campaign will be shared on social media and new content will be released over the next two weeks. Check out Daring’s Instagram to follow along!

About Daring: Daring is the leading plant-based chicken brand, founded by Ross Mackay, with the mission of re-thinking and replacing animal chicken from the global food system. Backed by global celebrities like Drake and Naomi Osaka, the award-winning brand is available via the brand’s website and nationally at over 9,000 retail stores like Whole Foods, Albertsons, Walmart and Kroger. Daring is a uniquely textured and tasty 1:1 substitute for chicken, made through a clean and simple flavor infusion process, with almost 50% less ingredients than market competitors. Daring’s vegan, gluten-free, and non-gmo plant chicken pieces are made with just six natural ingredients and seasoned in four flavor-packed signature spice blends including Original, Lemon & Herb, Cajun and Breaded.