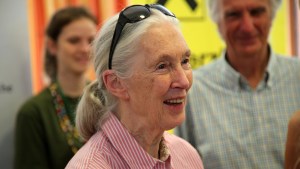 Renowned primatologist Dr. Jane Goodall has placed her support behind the cultured meat industry, agreeing to narrate a documentary on the topic, called Meat the Future.

Cultured meat (also called cell-based or clean meat) is animal meat that is produced by directly cultivating animal cells. The technology allows for real meat to be created without harming animals.

Meat the Future is an 88-minute documentary that follows the journey of cultured meat start-up Upside Foods (previously Memphis Meats).

In 2016, Upside Foods presented the world’s first cultured beef meatball. It cost $18,000 per pound. The following year, the start-up produced the first-ever cultured chicken fillet and duck a l’orange for half the cost.

The film follows the work of Mayo Clinic-trained cardiologist Dr. Uma Valeti, Co-founder and CEO of Upside Foods, and his team over a five-year period.

As well as exploring the intricacies of the industry – such as consumer perception and regulatory barriers – the film presents cultured meat as a solution to the environmental damage caused by animal meat production.

Animal agriculture has repeatedly been identified as a leading driver of deforestation, greenhouse gas emissions, air and water pollution, and biodiversity loss.

‘The story of planetary hope’

Goodall, now 87, has worked as a primatologist for more than six decades. In 1977, she founded the Jane Goodall Institute, a global wildlife and conservation organization. She has been a UN Messenger of Peace since 2002.

“This is the story of planetary hope – inspired by one of the biggest ideas of the century,” Goodall narrates in the film.

Now, the film has been updated to include new information about cultured meat as well as Goodall’s narration. Music from vegan artist Moby, who is now an executive producer of the film, was added to the documentary too.

“I’m excited about the documentary because it is solution-focused,” Goodall said in a statement. “The film proposes a way forward, to reduce methane, to reduce water and land use, to lessen the suffering of animals, and to prevent future viral outbreaks. I hope it sparks your imagination and inspires change.”