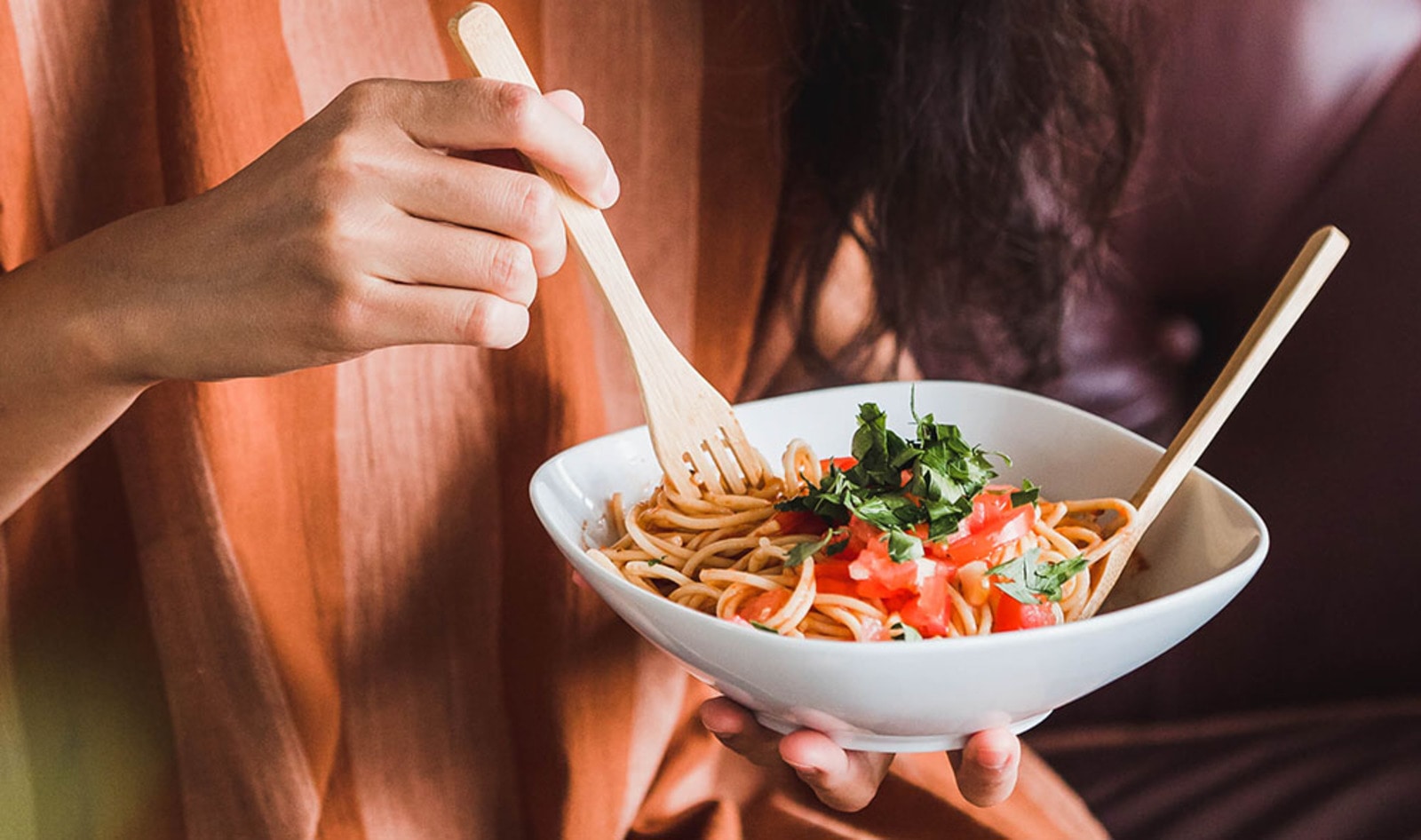 Noodles are about as universal a culinary love language as can be found: from thick udon noodles in Japan to baby fine capellini in Italy, beloved dishes featuring pasta in sheet, ribbon, tube, shell and dozens more forms can be found spanning the globe. Is pasta vegan, though? The answer is for the most part, yes, but there are some exceptions.

Whether they are layered in a rich lasagna or in a Vietnamese soup like pho, as much a childhood staple as macaroni noodles or painstakingly crafted, hand-pulled lamian noodles, our collective love affair with all-things noodle is easy to observe and understand.

Pasta and noodles are used interchangeably but they can mean different things. Pasta is generally defined as a product made with a dough of durum wheat and water, is derived from the word paste, referring to the unleavened dough that is formed into dozens of shapes. Pasta can be free of gluten.

Noodles of Asian origin can be made with different kinds of flour, such as whole wheat or buckwheat as well as gluten-free varieties made with rice, sweet potato starch, and shirataki made from the konjac plant.

Brief history on how pasta is made and in different culture

While they are celebrated the world over, the first recorded noodles, estimated to be 4,000 years old, were found in northwestern China and Asian countries have developed the most varieties.

The noodles of the East are thought to have reached Italy by way of nomadic Arab traders before the time of Marco Polo, who is spuriously credited with bringing them to the country. Today, there are beloved national dishes featuring noodles from Germany to South Africa, Thailand to Spain, from homey comfort food to elegant, upscale dishes.

Pasta goes beyond your macaroni and cheese or spaghetti and meatballs. Dumplings count! And there’s so much more to explore.

Spaghetti: Long, thin strands of durum wheat pasta. But can be made gluten-free as well from rice or bean-based noodles such as chickpea flour.

Linguini: Wider than spaghetti and thinner than fettuccine and perfect for twirling around your plant-based meatballs.

Tubular Pastas: Rigatoni, cannelloni, penne, and ziti are examples of pastas that are hollow through the middle. These hold up well to heavy sauces and lighter dairy-free cream sauces, too.

Ramen: Chinese-style wheat noodles, traditionally made with kansui, a type of alkaline mineral water. Use them in ramen, of course, but they’re delicious anywhere you want to use them.

Udon: Thick, soft wheat noodles that originated in Japan. These can often be in ramen and other Asian dishes.

Dumplings: Cuisines around the world have their own dumplings, which are dough and often wrapped around fillings, like potatoes, vegetables, and tofu. This can be Italian ravioli, Polish pierogies, and, of course, Asian dumplings of all kind.

Spätzle: Small dumplings associated with German cuisine, spätzle usually is made with eggs unless otherwise specified.

Pasta comes in at least 350 different shapes but is generally divided into different categories depending on relative shape.

Long pasta: Long pasta includes spaghetti, fettuccine and vermicelli, to name a few varieties. This is generally pasta designed to be served in a sauce and twirled with a fork.

Short pasta: Some short-cut pasta forms include macaroni, cavatappi, and penne. Also served with a sauce, the shape is best for piercing with a fork and goes well with larger additions to the dish, like beans and roasted veggies.

Stretched pasta: These are usually disks of pasta made through rolling the dough, and include cencioni and orecchiette. Also perfect with a sauce.

Pasta for filling: Ravioli is iconic, of course, but also tortellini and cannelloni are also varieties. These are great to fill with vegan ricotta, roasted mushrooms and more.

Gnocchi pasta: Its own category, gnocchi is a dumpling made with potatoes and flour, but sometimes also eggs and cheese. It is great tossed with a simple vegan butter sauce, simple veggies and dairy-free parmesan.

Asian noodles are generally long in shape but made with a wider variety of ingredients. Here are six popular kinds you can find.

Glass noodles: Also known as cellophane, these clear, thin noodles are made with starches from sweet potato to mung bean and are naturally gluten-free.

Ramen: Ramen noodles are traditionally wheat-based and have a springy, silky texture.

Shirataki: Made with konjac yam starch, these noodles are thick and opaque, often served like rice noodles.

Soba: A nutty, darker-hued noodle, soba are made with buckwheat, a seed, and are naturally gluten-free.

Some contain eggs, milk, butter Both European-style pasta and Asian noodles can be made with eggs in the dough, which is usually the only animal product used.

When shopping at the grocery store for Italian pasta, note that most brands of fresh, refrigerated pasta have egg in them unless otherwise noted. While boxed, also known as dried, pasta is less likely to have egg in it than fresh, it is still a good idea to check the ingredients label, which may note possible allergens the product came in contact with on shared equipment while being manufactured but is not included in the ingredients.

Also note that when dining at Italian restaurants with fresh pasta, it is likely the dough contains eggs unless you know otherwise. Ask your server!

With Asian noodles, be aware that wonton, chow mein, and lo mein noodles often contain eggs, whether you are shopping at the grocery store or dining out.

Ready to dig into a bowl of noods? Start here. These brands all have vegan options. The only question is what will you top your pasta bowl with?

This global brand based in Italy only sells pasta without eggs or other animal products. Colavita’s Pappardelle Nest Pasta tossed with a vegan pesto is the definition of comfort food.

An international brand started in 1912, most of Barilla’s wide variety of pastas are made without animal products, including their gluten-free and Protein+ ranges.

Widely available in big box stores across the country, all of De Cecco’s wheat-based pastas are plant-based, including the Spinach Fusilli, and the high protein range, like the Red Lentil Spaghetti, are as well.

Classic pasta varieties like Linguine and Spaghetti are vegan as is, made with just durum wheat semolina flour. Make your favorite vegan mac-and-cheese with the Elbow macaroni pasta.

Trader Joe’s has a full range of organic, conventional and gluten-free pasta options that are vegan, including the tightly coiled Organic Fusilli Corti Bucati for a fun and unusual shape and the gluten-free Brown Rice Penne, which is perfect for a marinara sauce or vegan pesto.

Aldi US’ bronze-cut pasta in forms like Rigatoni, Casarecce, and Conchiglie shells are made without animal ingredients and bring authentic Italian taste at affordable prices.

Made with protein-packed chickpeas, Banza’s pasta in Shell, Penne and Rotini forms are gluten-free, vegan and sturdy enough to stand up to any sauce.

A maker of exclusively vegan ramen noodles, try the Asian Vegetable or Garlic Pepper for a convenient bowl of flavorful soup.

The name that is synonymous with instant ramen noodles has two vegan flavors, Soy Sauce and Chili.