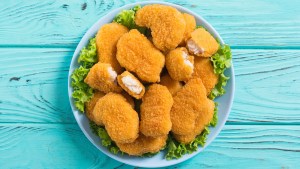 Moreover, customers will be available to test the products at a trade show next week, according to reports.

Plant-based chicken products have been in the pipeline ‘for some time’, Impossible Foods says. It teased on Instagram that ‘something new is coming soon’. Later this fall, it will be released in restaurants, and later retailers. ‘We’ve been busy with other things’, Impossible President Dennis Woodside told Bloomberg. Pricing is yet to be revealed, but the company has slashed prices in the past in order to compete with the cost of beef.

Earlier this year, Impossible Foods eyed a $10 billion valuation on the stock market – with plans to go public later this year. This is a growth of $6 billion since its valuation last year. Moreover, its latest series G investment brought its total worth up to $1.5 billion.

It’s in line with a growing vegan chicken nugget market, too. The market is expected to reach $1.8 trillion by 2040. It follows the investment from a host of celebrities in recent years, including rappers Jay-Z and Drake. SIMULATE, which describes itself as the ‘Tesla of chicken’ is now valued at a staggering $250 million. Moreover, Arnie Schwarzenegger’s son Patrick invested in NUGGS earlier this year. The post Impossible Foods To Release Plant-Based Chicken Nuggets This Year appeared first on Plant Based News. plant-based plant based nasdaq-bynd impossible foods nuggs chicken beef ipo investment