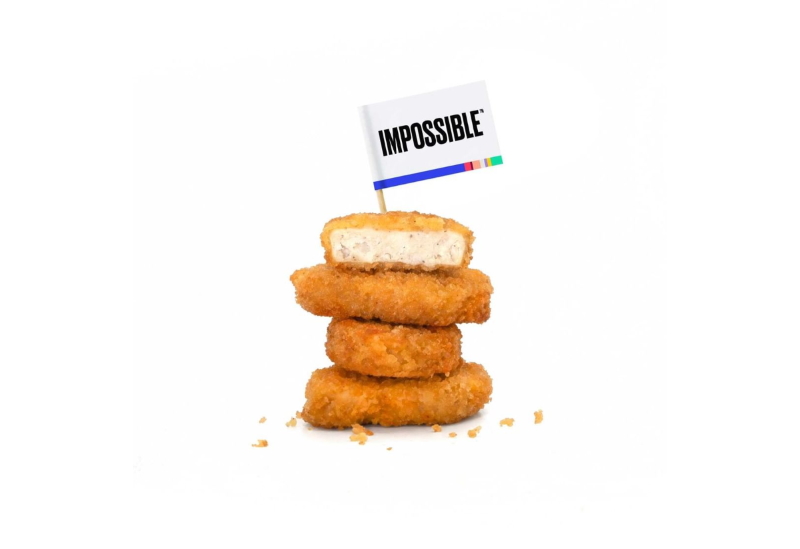 Plant-based meats are all the rage right now. Many have switched to the guilt-free, meat-free life with the ever-increasing array of choices available to them, ranging from decadent burgers to luxe beef wellingtons. On top of all that, Impossible Foods will be adding their new chicken nuggets to the plant-based meat menu. Whilst not particularly flashy or luxurious, chicken nuggets are beloved by people of all ages. It’s simple, it’s comforting, and it gets the job done—a few minutes in the microwave and you’ve got tasty morsels of chicken to indulge in. And in the hands of Impossible Foods, anything is possible. They’re one of the companies that revolutionised the plant-based burger after all, along with other plant-based brands in the market.

It’s worth noting that these chicken nuggets will be Impossible Foods’ first-ever chicken product. It will officially be unveiled at a trade show next week to potential clients and consumers who can see it in the flesh. The ingredient list sees a distinct omission in Heme, the ingredient that imparts the meaty bite to their burgers and sausage patties. Instead, Impossible Foods will replicate the chicken nuggets texture with the use of sunflower oil and texturised soy.  Impossible Meat has made plans for these plant-based chicken nuggets to be first made available in restaurants before they hit the shelves of retailers.

It’s interesting to see Impossible Foods hop into the faux-chicken meat ring with chicken nuggets, since Beyond Meat has also recently just launched their own Chicken Tenders. But Beyond Meat has also gotten a leg up on Impossible Foods by collaborating with popular US franchise Panda Express, launching a vegan version of the Chinese food brand’s popular orange chicken. With the market for chicken as huge as it is, it’ll be interesting to see who will come out on top in this escalating plant-based chicken war. Other articles you might like: First dibs: Nutrisoy’s new Ondeh Ondeh Milk hit the nail right on-deh head The Butcher’s Wife revamps an all-new menu — available via delivery and takeaway The post Impossible Foods is launching chicken nuggets made from plant-based meat appeared first on SETHLUI.com. plant-based beyond meat nasdaq-bynd impossible foods meat chicken beef milk butcher burgers sausage soy burger