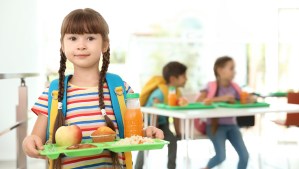 Impossible Foods is debuting in schools across the US after securing Child Nutrition (CN) Labels for its plant-based meat.

The brand described the move as a ‘milestone for entering the K-12 market.

What are Child Nutrition Labels?

They ‘determine how much a particular food contributes to federal meal pattern requirements for nutritionally balanced meals for children each school day’.

Pat Brown is the company’s CEO and Founder. He said: “Making Impossible products available everywhere people consume meat, which for kids often includes schools, is key to the mission of the company

“Schools not only play a role in shaping children’s dietary patterns… They also play an important role in providing early education about climate change and its root causes.

“We’re thrilled to be partnering with K-12 school districts across the country. [It will] lower barriers to access our plant-based meat for this change-making generation.”

Impossible is now launching its K-12 pilot programs with school districts across the US.

Michael Morris is Senior Manager of Culinary Offer Implementation at Sodexo – one of the nation’s largest foodservice contractors.

He said increasing schools’ plant-based offerings is essential to slash carbon emissions by 34 percent by 2025.

“The Impossible Burger is a product we think teenagers are going to get excited about,’ Morris added.

“We’re interested in how the popularity of this low-carbon food can help effectively lower a whole district’s carbon footprint, while also getting students more engaged in thinking about their connection to the planet.”

The meatless dishes are already proving a success.

Superintendent Alicia Henderson served Impossible Meat Sauce on spaghetti and burgers to middle and high school students as part of its pilot program.

She said: “Early pilot results show a strong response and engagement from both students and teachers.

“We’re excited to be one of the first districts in the country to offer students this product as an alternative to beef.”