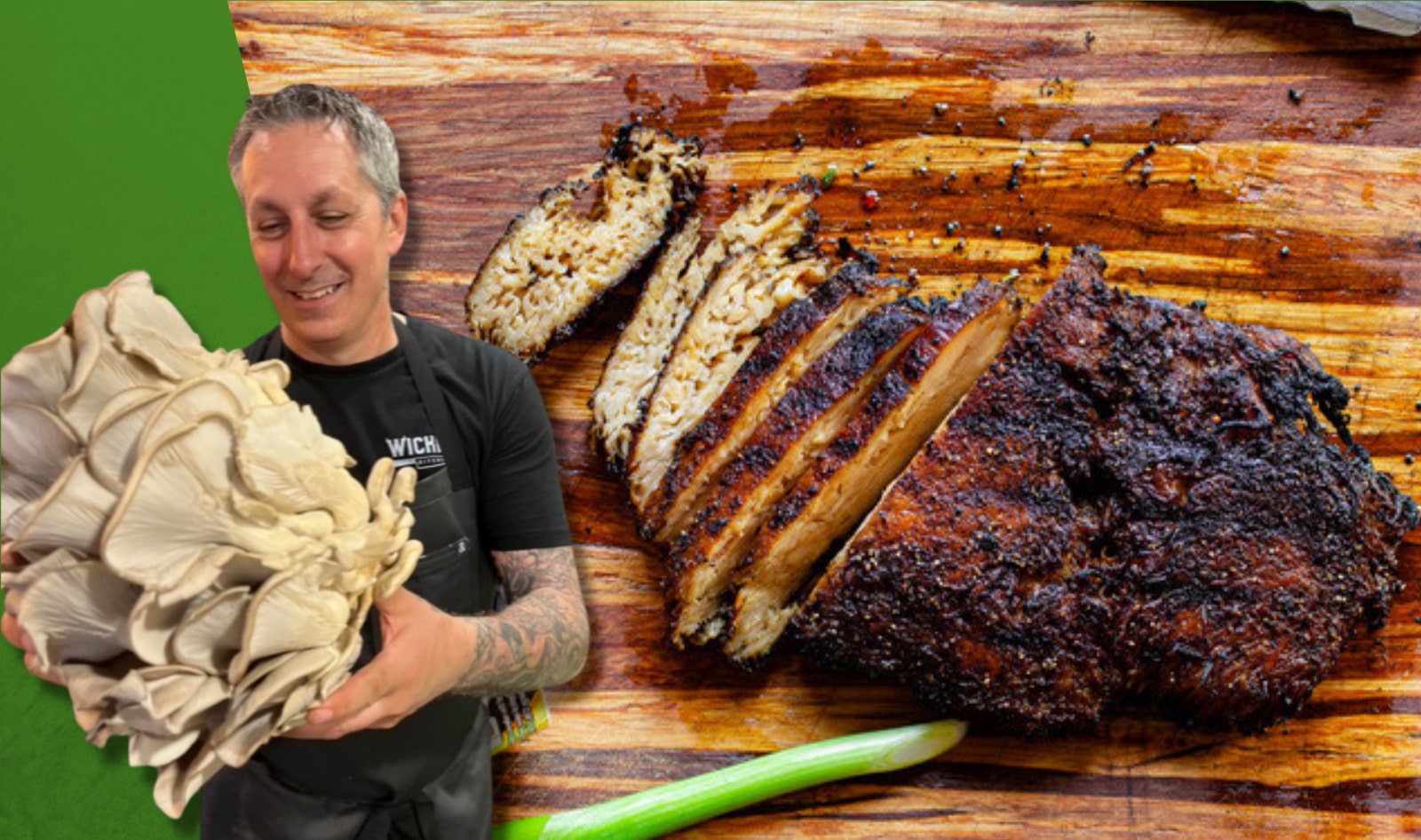 Derek Sarno was the only vegan chef invited to participate in this year’s Hot Luck Festival in Austin, TX, and he came to play. The festival is organized by Aaron Franklin—the owner of Austin-based Franklin Barbecue and one of the top barbecue pitmasters in the country—and brings together renowned chefs to participate in live-action cooking events. Sarno was personally invited by Franklin to join the festivities, cooking for 2,000 people alongside more than 80 other chefs.

Sarno—who was joined by his chef brother Chad Sarno—participated in the Al Fuego event on May 28 where he focused on bringing out the meatiness of 400 pounds of mushrooms grown for him by local farm Hi-Fi Mycology.

Sarno grilled and pressed the mushrooms into substantial vegan steaks he used as the base for Oyster Mushroom Souvlaki which he served with Tzatziki Slaw with Calabrese Pepper Sauce served on corn tortillas. He also created a hearty Peppered Lion’s Mane Steak which he served with Cognac Butter Sauce and mashed potatoes.

“It’s such a privilege to be included in this amazing chef lineup. We had a local Austin mushroom grower, Hi-Fi Mycology, grow about 300 pounds of Blue Oyster Mushrooms and 100 lbs of Lion’s Mane Mushrooms for us,” Derek Sarno told VegNews. “I’ve been honing how to prepare these mushrooms to the best of their ability for the past decade because of their great flavor on the grill and incredible meat-like texture so we fit right into a barbecue event.”

The Sarno brothers are both New England-born chefs and have been showcasing the versatility and meatiness of mushrooms through their various ventures—from food brands to cookbooks—throughout the years. The Hot Luck festival gave Derek Sarno a chance to represent vegan meat-making culinary techniques in a format typically reserved for animal proteins.

The chef’s approach was similar to other pitmasters—with hot burning coals, wood chips, and all—with the only exception being that he used mushrooms instead of animal meat. “We all grow up with heroes in the field that we aspire to be the best in and I’m no exception. To be invited to cook alongside some of the best and most well-known chefs that I admire in the culinary world has been an amazing experience that validates the work I’ve been doing for so long,” Derek Sarno said, adding that his aim was to show that “veg and mushrooms can be the hero.”

Derek Sarno’s participation in the meat-heavy event is indicative of a new era of barbecue throwdowns, where vegan meat can stand up to its animal counterparts. “Aaron [Franklin] is the King of barbecue and to cook for and with him at what’s normally an all meat event is a huge achievement, a highlight and the start of what will be more to come,” Derek Sarno said.

Sarno was at the event under the banner of his food brand Wicked Kitchen brand, which the chef co-founded with his brother Chad Sarno in the United Kingdom. Wicked Kitchen first hit shelves in 2018 at popular UK grocery chain Tesco, where Derek Sarno is the Executive Chef and Director of Plant Based Innovation. After becoming an instant hit, he expanded the brand to include 200 different products in more than 15 categories, including prepared meals, mushroom-based shawarma, desserts such as Sticky Toffee Pudding, and much more.

After securing $14 million in funding, the Wicked Kitchen brand began its US expansion this year with some fan-favorite UK items. Stateside, the brand launched a unique-to-market ice cream line made from a base of lupini beans in pints and novelty bars. This year, Wicked Kitchen will grow its product set by more than 50 percent across multiple categories in Kroger and Sprouts stores nationwide.

The pioneering chef brothers are also co-founders of Good Catch Foods, a brand that makes vegan seafood products from a blend of six legumes. Under this brand, the brothers have developed retail products such as vegan tuna sold in pouches, frozen crab cakes, and salmon burgers. Good Catch has also found its way onto the menu of various restaurants and last year, Long John Silver’s—the largest seafood chain in the United States—tested the brand’s Fish-Free Filet and Crab-Free Cakes at locations in California and Georgia for a limited time.