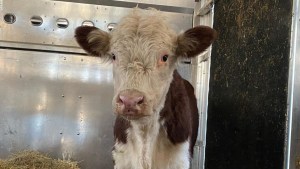 A young calf that escaped from a slaughterhouse in Queens, New York, has been rescued by an animal sanctuary.

Believed to be just nine months old, the Hereford cow escaped death when she ran away from slaughter.

Now, she resides at Skylands Animal Sanctuary and Rescue alongside more than 450 other residents including 93 cows.

The “beautiful” calf has since been named Stacy and the sanctuary says she is now “forever safe.”

On December 18, Stacy made a break from the undisclosed business and ended up in Flushing Meadows Corona Park, which is a public park in northern Queens.

Upon her arrival, she faced a quarantine period, before being able to meet some of the other “kids” at the center.

Staff at the sanctuary have been posting regular updates on how Stacy is doing. This comes after police and rangers’ posts of the escape having gathered social media attention.

Upon sharing photos of her on Instagram, the center noted: “We are looking forward to getting to know this sweet little girl.”

With her quarantine now over, Stacy got to play with some of the other young calves this week.

According to the sanctuary, all animals get “exactly what they need” with the space to run and live “unencumbered by the threat of harm.”

You can find out more about Skylands here

The post How A Calf Escaped A New York Slaughterhouse And Ended Up In An Animal Sanctuary appeared first on Plant Based News.