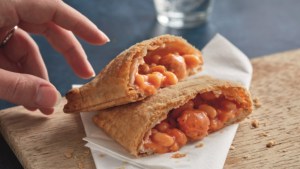 British bakery chain Greggs is upping its vegan options once again. The company is set to launch a plant-based version of its popular sausage, bean, and cheese melt.

Greggs tweeted about the launch, writing: “The Vegan Sausage, Bean, and CheeZe Melt is coming. WARNING, it’s a bit of a mouthful.

“First we gave you the vegan sausage roll. Then the vegan steak bake. And now, another legend has been veganed.” The company added that ‘your taste buds will love’ the vegan melt, which is ‘satisfying and fulfilling’. The meat- and dairy-free melt features Quorn sausage. Greggs has worked with Quorn in the past to produce its vegan sausage roll, steak bake, and most recently, its plant-based ham and cheese baguette. Hannah Squirrell, Customer Director at Greggs, said: “The latest addition to our menu gives customers another vegan-friendly alternative to one of our most iconic menu items. “As we expand our vegan options with the launch of our new Vegan Sausage, Bean and CheeZe Melt, we mark another milestone as we continue with our journey to become our customers’ favourite destination for food-on-the-go.”

Greggs made waves in the vegan scene when it launched its now-iconic plant-based sausage roll in 2019. It sold out across the UK. Greggs said it believed the vegan launch was part of the reason for the 14.1 percent increase in sales that followed. Keen to keep up with changing consumer preferences, supermarkets like Iceland and Asda started selling Greggs’ vegan products, too. The bakery chain has also offered plant-based glazed ring donuts and seasonally, vegan hot cross buns, sweet mince pies, spicy vegetable soup, and a Mexican bean and sweet potato wrap. The Vegan Sausage, Bean, and CheeZe Melt will be available at Greggs from August 5. The post Greggs Veganizes Its ‘Legendary’ Sausage, Bean, And Cheese Melts appeared first on Plant Based News. plant-based plant based greggs nasdaq-bynd meat chicken cheese sausage dairy-free alternative